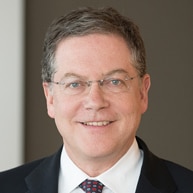 Mr. Scherr joined Goldman Sachs in 1993 as an Associate in the Financial Institutions Group. In 1996, he transferred to Emerging Markets/Capital Markets in the Fixed Income, Currency and Commodities Division. In 1998, Mr. Scherr moved to the Communications, Media and Entertainment Group. He served as Chief Operating Officer for the Investment Banking Division from 2005 to 2007 and was Head of the Americas Financing Group before serving as Global Head of the Financing Group from 2008 to 2014. Mr. Scherr led the firm's Latin American business from 2011 to 2016, was the firm's Chief Strategy Officer from 2014 to 2017, and served as Chief Executive Officer of Goldman Sachs Bank USA and Head of the Consumer & Commercial Banking Division from 2016 to 2018. He was named Managing Director in 2001 and Partner in 2002.

Mr. Scherr serves on the board of the Jewish Museum in New York and the New York Stem Cell Foundation.