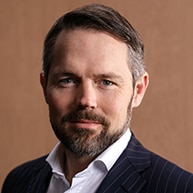 Julian Salisbury is Chief Investment Officer of Asset & Wealth Management. He is a member of the Management Committee. Mr. Salisbury is also Co-Chair of the Asset Management Investment Committees, including those for private equity, infrastructure, growth equity, credit and real estate. He is also a member of the Board of Advisors of Launch With GS, Goldman Sachs’ $1 billion investment strategy grounded in the firm's data-driven thesis that diverse teams drive strong returns.

Prior to assuming his current role, Mr. Salisbury was Global Co-Head of Goldman Sachs Asset Management. Before that, he served as Global Head of the Merchant Banking Division. Previously, Mr. Salisbury was Head of the Global Special Situations Group from 2013 to 2019 and Head of the European Special Situations Group (ESSG) from 2008 to 2013, based in London. From 2007 to 2008, he worked in Moscow establishing ESSG’s business covering the former Soviet Union, and was a founding member of ESSG in 2004. Previously, Mr. Salisbury held roles in Bank Loan Research, High Yield Research and Product Control. He joined Goldman Sachs in 1998, and was named Managing Director in 2005 and Partner in 2008.

Prior to joining the firm, Mr. Salisbury worked in the audit practice of KPMG. He qualified as a chartered accountant in 1998 and is a member of the Institute of Chartered Accountants in England and Wales.

Mr. Salisbury serves on the Board of St. Bernard’s School and is a member of the Board of Directors of Sponsors for Educational Opportunity.