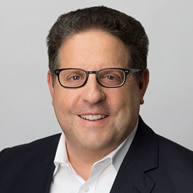 Laurence Stein serves as Executive Vice President and Chief Operating Officer of Asset & Wealth Management. He is a member of the Management Committee.

Prior to assuming his current role, Mr. Stein served as Executive Vice President and Chief Operating Officer of Goldman Sachs Asset Management. Before that, he was the firm’s Chief Administrative Officer from 2018 to 2022. Previously, Mr. Stein was Global Head of the Operations Division. From 2009 to 2015, he served as Chief Operating Officer of the Securities Division. From 2005 to 2009, Mr. Stein was Chief Financial Officer for the Investment Banking Division and the Federation, and before that, served as Chief Financial Officer of the Securities Division. He joined Goldman Sachs in 1996 in the Finance Division, and was named Managing Director in 2003 and Partner in 2006.

Prior to joining the firm, Mr. Stein worked in the Financial Services Group at Ernst & Young in New York and Deloitte & Touche in South Africa.