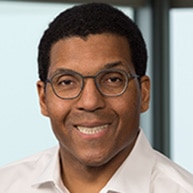 Prior to assuming his current role, Mr. Hutchinson was Head of Financial Institutions M&A in the Americas and a Senior Coverage Officer focused on companies in the specialty finance sector. Before that, he was Co-Head of the specialty finance team within the Financial Institutions Group from 2013 to 2015. Mr. Hutchinson joined Goldman Sachs as an Associate in 2001, was named Managing Director in 2008 and Partner in 2016.

Mr. Hutchinson began his career as an Associate Consultant at the Boston Consulting Group in its Toronto office from 1997 to 1999.

Mr. Hutchinson is a member of the board of directors for The Studio Museum in Harlem and Hospital for Special Surgery.