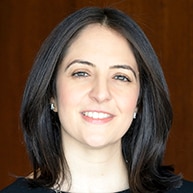 Stephanie Cohen is Global Head of Platform Solutions and a member of the Management Committee. She is also a Global Executive sponsor of the Women's Network.

Prior to assuming her current role, Ms. Cohen was Co-Head of the Consumer and Wealth Management Division. Before that, she was the firm's Chief Strategy Officer, where she drove strategy, Mergers & Acquisitions (M&A), strategic investing and partnerships for the firm. Ms. Cohen also led Launch With GS, Goldman Sachs’ $1 billion commitment to invest in companies and investment managers with diverse leadership, as well as GS Accelerate, the firm’s in-house innovation engine. Before that, she was Global Head of Financial Sponsor M&A in the Investment Banking Division (IBD). Ms. Cohen was Sector Captain for General Industrials in the Global Industrials Group and a member of the M&A Group in IBD. In 2008, she managed Conflicts and Business Selection for IBD in the Americas. Prior to that, Ms. Cohen was a Vice President in the Industrials and Merger Leadership Groups in San Francisco. Earlier in her career, Ms. Cohen worked in New York in the M&A department. She joined Goldman Sachs as an Analyst in 1999, was named Managing Director in 2008 and Partner in 2014.

Ms. Cohen serves on the National Board of Directors of College Spring and as a member of the Board of Quill.org. She also serves as trustee for the Board of The Economic Club of New York.