Mike Mattioli and Fred Biga, vice presidents in the Global Markets Division in New York, have developed a hands-free sanitization solution by harnessing the power of UV light. 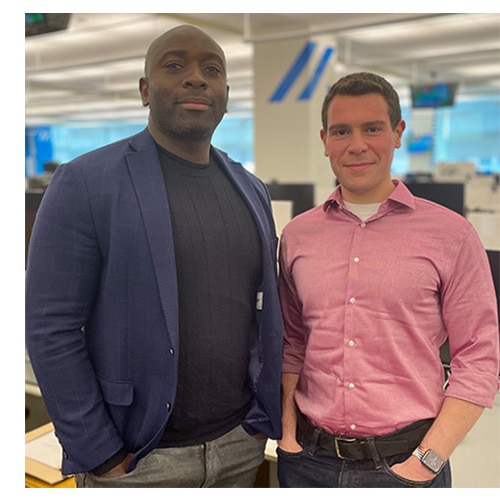 The colleagues' development focuses on the technology behind digital displays, such as computer monitors, TVs, or cell phones. Images on these displays are composed of millions of pixels, which are typically rendered by modulating a combination of three colors -- red, green, and blue. Mike and Fred’s invention adds a fourth “color” – an ultraviolet light -- to the pixels. The addition of UV light to the pixel arrangement would brighten digital displays’ images during normal usage, but could also emit sanitizing UV light when a specified cleaning mode is activated.

With Mike and Fred’s technology, a “cleaning mode” would enable digital devices to sanitize their surroundings without the need for manual labor or additional cleaning supplies. In an office setting, every computer monitor could sanitize its own keyboard, mouse, and desk area within a pre-determined designated time. Beyond an office setting, this technology could be scaled for use in other highly trafficked areas, like subway stations, shopping malls, and airports – or anywhere with digital screens or displays.

Developed to support the enhanced cleaning efforts prompted by the COVID-19 pandemic, Mike and Fred’s UV arrangement could effectively kill other pathogens, bacteria, and viruses, beyond SARS-CoV-2. Safety concerns regarding the use of UV light are also top of mind, as overexposure can be harmful for humans. In practice, safety mechanisms would be implemented to prevent UV light from being emitted from digital displays when people are nearby.

Mike and Fred submitted their invention to the United States Patent and Trademark Office (USPTO) in January of 2021 – almost a year after having the idea and working to implement it. The technical process of manipulating this UV light in the pixel arrangement is a complex issue, one which both Mike and Fred continue to work on as they await a response to their trademark application.