Annie Panter works in the firm’s Securities Division. She competed in Field Hockey as a member of the Great Britain Olympic team at the 2008 Olympics in Beijing and the 2012 Olympics in London (Bronze Medal). Here, Annie shares how she got involved in field hockey, what motivated her during training and her experiences being on a team. 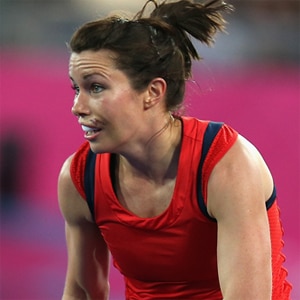 Q: How did you get involved in field hockey?
Annie: I loved all sports as a kid, and I was generally happy playing any sport. [Field hockey] was the main girls’ sport at school, and I loved the team sport aspect. It was such a fast, skillful game. I [also] had a P.E. teacher at school who advised me, and her main sport was field hockey, so I think it was probably natural that I was always going to take to that.

Q: Describe the training and commitment that Olympic-level performance requires. What type of preparation and sacrifice did your training demand?
Annie: I was a full-time athlete – [training] two or three times a day, six days a week. When I was younger, after school I was practicing and training. I guess that’s my memory of school other than spending time with my friends. I was always practicing.

Q: What motivated you to keep training that hard for something?
Annie: I wanted to be the best I could be. Playing international hockey and for Team Great Britain was all I could think about. That was all I cared about. I remember watching my first Olympics – 1992 in Barcelona – and I was just in awe. All I wanted to do was be an Olympian and win a medal at the Olympics.

Q: Please share any setbacks or challenges you experienced on your path to the Olympics. How did these impact you and how did you manage them?
Annie: I had some serious injuries during my [athletic] career. I had a really bad car crash in 2003. I had just been selected as part of the Great Britain Training Squad for the Olympics in Athens, and I was involved in a bad seven car pile up – I smashed my ankle pretty badly.

I also went through a really bad knee injury which kept me out for a year in 2006 and then kept me out for two and a half years between the Beijing and London Olympics. I had a huge operation and was in a leg brace for three months that went from my hip to my ankle. So there were quite a few injury setbacks along the way, [but] I never questioned it was what I wanted to do.

I think back to my first injuries, and I probably spent quite a bit of time wallowing in my own self-pity of how unlucky I was. As I got older and faced injuries, I had more of a perspective on it. There were worse things that happened to more people in the world than that. And I was able to be more positive about it and accept that yes, [being injured] wasn’t ideal for my career, but I also had the chance to get back to play and do what I loved doing. That was the overriding thing that drove me.

Q: Share a little bit about the experience of being part of a sports team that’s performing at the highest levels of excellence. What were the team dynamics like? What similarities and differences do you see among Goldman Sachs teams?
Annie: I absolutely love being part of a team – the feeling of competing and winning as a team, even losing as a team. If I’m honest, I miss that feeling. It’s a really unique environment being part of a team sport at that level. Because on the one hand you are teammates and everything you do is to achieve the same goal, to win a gold medal with your team. On the other hand, you have 28 athletes fighting for 16 places, so within that you’re also rivals. The same person you’re sitting next to and giving feedback to make them better – because them being better is going to help achieve the goal of the team winning – [is the person] who might be selected ahead of you and take your place.

[On a team], your awareness of each other and also yourself is extremely high, too. You know each other inside and out in terms of how people are going to react to things – how to help someone on a bad day, how to get the best out of each and every person, so that as a unit, you’re better. And then you equally need to know that about yourself. Spending that amount of time under that much pressure with people, you learn pretty quickly about yourself.

Teamwork is extremely important in my current environment [at Goldman Sachs] – you have a team made up of different people. Ultimately you’re on one team trying to create revenue for the firm, but you have different agendas within that. Coming from a team background gives you insight into how different people are motivated.

Q: What is your favorite memory from participating in the Olympics?
Annie: My favorite memory would be winning [the bronze medal] at the 2012 London Olympics and sharing that moment with the other people on the team. I don’t think that memory will ever leave me. It fades with time and in some ways it feels like a lifetime ago. But I will never be able to watch a montage of the Olympics without the hair standing up on the back of my neck – feeling something special inside.