Rob Williams works in the firm’s Securities Division in London. He competed for Great Britain in Rowing at the 2012 Olympics (Men’s Lightweight Four, Silver Medal). Here, Rob shares how he got involved in rowing, maintaining motivation while training and overcoming a serious back injury. 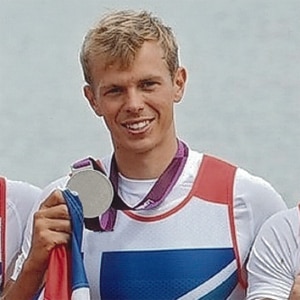 Q: How did you get involved in rowing?
Rob: I started when I was 14. It was just after [rower] Steve Redgrave won his fifth gold medal at the Sydney Olympics [in 2000]. With some friends we decided to get a bit healthier and we joined the local rowing club – it all kind of snowballed from there.

I rowed for a club for a couple of years and for university for a year and before joining London rowing club. I was 19 when I first rowed for Great Britain and managed to catastrophically injure myself that year and tore a disc in my back. I had to sit the year out and then slowly got back into rowing again.

Q: Describe the training and commitment that Olympic-level performance requires. What type of preparation and sacrifice did your training demand?
Rob: I was essentially a full-time athlete for six years – from 2007, just before the Beijing Olympics, all the way to 2012 and the London Olympics.
We trained in three-day cycles with either a light day or day off every Sunday. Within the cycle there would be two three-session days along with an intense two-session day. An example of a three-session day would be a 20-kilometer row, a weights session and an 18-kilometer ergo (an indoor rowing machine).
I was also doing full-time academia at the same time, [earning a PhD in x-ray crystallography]. A typical day would start early as I worked my way through the three training sessions, then, go into the lab, start an experiment…there were times when I’d start an experiment [and] go home, go to bed, get back up at midnight, go back in and finish off the experiment, go back home, go to bed and then get up at 6:00 a.m. for training.

Q: What motivated you to keep training that hard for something?
Rob: In my experience, for most of the people who go to the Olympics and medal – it’s not that they love winning, they hate losing. You have to enjoy the journey, because if you don’t, it’s just too long and too hard of a thing to possibly embark on if you’re only doing it for the hope of achieving a medal or winning at the end of it.

Q: What was it like coming off of the Olympics and that kind of regimen? Do you still feel a need to achieve something extraordinary?
Rob: One of the big reasons I went into the industry I did was obviously because I did a mathematical and quantitative PhD, but also because I needed to have that kind of stimulation in my life.
A lot of Olympic athletes get very depressed after the Olympics, [because] they suddenly lose structure in their day and life… For me, it was about transferring that energy into something else.

Q: Please share any setbacks or challenges you experienced on your path to the Olympics. How did these impact you and how did you manage them?
Rob: [After I tore a disc in my back at 19], I had to take a year off, but I’ve had it happen to me a couple of times. The first time around, we really didn’t know what was wrong because it’s a very unspecific injury and unless you’re [familiar with it], people aren’t as tailored to spot the injury. So I was at the stage where it took me 30 seconds to stand up, and when you’re 19 years old, your back really shouldn’t be in that state. I had surgery on it and then did a few months off, and then slowly got back into rowing again – I had surgery in the summer and the following summer. Nonetheless, at least it taught me how to protect my back a little bit better.

Q: Share a little bit about the experience of being part of a sports team that’s performing at the highest level. Can you describe the team dynamic for your Olympic team? What similarities and differences do you see when you compare it to your Goldman Sachs teams?
Rob: There were four of us in the boat, and [at the 2012 London Olympics] we came in second by .08 of a second and we were .5 of a second ahead of third place. You so heavily and totally rely on each other for those moments. I think half the drive is the hatred of failure, and the other half is you definitely don’t want to let anyone else down. It’s one thing to let yourself down, but when you have a team, and everyone’s completely relying on you, then it’s very, very hard to let them down.

Being in a team made it far more enjoyable. You do three sessions a day together and essentially lived in each other’s pockets for the better part of four years. I think that would have been an incredibly hard experience to do by yourself.

Q: What did you take from your Olympic experience that would be helpful for other people at Goldman Sachs to hear?
Rob: The best lesson I learnt was to do with using stress to improve your performance rather than hindering it. Everyone has had a different range of experiences in life and thus experienced stress to different degrees, by using high stress experiences to normalize your basal levels I found it helps give a sense of perspective and therefore clarity when faced with daily challenges.

Q: What is your favorite memory from participating in the Olympics?
Rob: The buzz of The final 500m.  In 2012, it was a 2,000-meter race with 40,000 people predominantly spread over the last 500m  they were all cheering and you couldn’t hear anything. We were 50 meters from the crowd and even if you shouted at the top of your lungs, you couldn’t hear the person next to you. Being British in the London Olympics, everyone was obviously cheering for us.

That memory, particularly as we were strongly in a medal position at that point – is my strongest memory of the Olympics by a mile. It’s so firmly imprinted into my mind that It would be hard to forget.