Impact Report: Investing in the Power of Women in China

BEIJING, CHINA, NOVEMBER 20, 2019—Tsinghua School of Economics and Management (SEM) and Goldman Sachs 10,000 Women announced today the launch of a report examining the impact of the business and management education program in China over the past 10 years. The report developed by the Entrepreneurship Research Center on G20 Economies of Tsinghua University, “Investing in the Power of Women in China: Impact Report on Goldman Sachs 10,000 Women,” found that graduates are increasing revenue, contributing to job creation, and productivity. On average, graduates quadruple their revenue within 30 months of graduating at an average rate of 78% per year, they add 55% more staff, at an average rate of 19% per year, and they triple their productivity at an average rate of 51% per year.

Dean BAI Chong-En said, “Tsinghua SEM has a long history with Goldman Sachs in China. Since 2009, 10,000 Women has worked with Tsinghua University, graduating nearly 750 women entrepreneurs from most provinces and regions of China. These graduates of Tsinghua University launched a nationwide 10,000 Women alumni community in 2017, we look forward to collaborating with Goldman Sachs and continue to empower female entrepreneurs.”

“The results of this report demonstrate that as a result of graduating from Goldman Sachs 10,000 Women, these women entrepreneurs have grown their businesses and brought greater prosperity to their communities over the last decade,” said David Solomon. “We look forward to continuing to invest in the vibrant alumni community as we plan the next phase of our efforts,” he added.

Supporting the growth of small and medium sized enterprises (SME) businesses is critical to China’s economic success. SMEs account for 60% of China’s national GDP and comprise more than 99% of firms, employing over 80% of the urban workforce. The proportion of women entrepreneurs is increasing, reaching 31% in 2017, with women entrepreneurs showing greater early stage entrepreneurial activity than men. 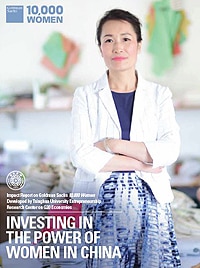