Memorandum to All Goldman Sachs Employees on John C. Whitehead

The following memorandum was sent yesterday to all Goldman Sachs employees on the passing of John C. Whitehead, former chairman and senior partner of Goldman Sachs: 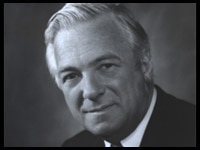 We deeply regret to inform you that John C. Whitehead, our former chairman and senior partner, passed away early this morning. We grieve his loss and honor his achievements and contributions in service to his country and Goldman Sachs. John was a man of enormous grace and integrity, and his legacy will endure in the institutions he led and in the lives of those he cared for and mentored.


As a 22-year-old, John served as an ensign on the USS Thomas Jefferson, where he was placed in charge of five of the landing craft for the invasion of Normandy during World War II.  His Higgins Boat landed on Omaha Beach, a site of extraordinary loss of life.

During his 37 years with Goldman Sachs, John was an influential figure whose decisiveness, high ethical standards and creativity helped lead the firm through a significant period of growth. One of his most important legacies was the codification of Goldman Sachs’ Business Principles, which John crafted in 1979.

John began his career with Goldman Sachs in 1947 as a junior statistician and was promoted to partner nine years later in 1956. As head of investment banking activities, John created Investment Banking Services to seek out new business, a departure from what Wall Street firms did at that time.

John was named co-chairman in 1976, along with the late John L. Weinberg. During his eight years as co-chairman, one of John's priorities was to grow the firm's presence outside of the United States. The opening of offices in London and Tokyo set the foundation for our global footprint today.  John retired in 1984 and became a limited partner and chairman of the Goldman Sachs International Advisory Board.

Shortly after leaving the firm in April 1985, John was asked to become deputy secretary of state of the United States, second-in-command to Secretary of State George Shultz, a role he held until early 1989. John was later awarded the Presidential Citizens Medal by President Ronald Reagan.

After serving as deputy secretary of state, John returned to New York. Throughout his life, he remained committed to public service and was active in innumerable educational, civic and charitable organizations. In late 2001, he was appointed chair of the board of the Lower Manhattan Development Corporation to help revitalize that part of New York City after the devastation of September 11.

John received an MBA from Harvard in 1947 and a BA from Haverford College in 1943. He was a lieutenant in the US Navy during World War II.

John is survived by his wife, Cynthia, and two daughters and a son from previous marriages.

Please join us in extending our deepest condolences and most heartfelt sympathy to his family.