In 2012, Emirates, one of the world’s preeminent airlines, sought to continue the expansion of its fleet of Airbus A380s, the largest passenger plane in the world. The challenge, despite the company’s stature, was how to lease the planes, since banks, which once stood ready to lend, were now more constrained in their ability to back long-term aircraft leases. Doric, a leasing company, worked with Goldman Sachs to find a solution. The most likely alternative was the capital markets, but access to them was limited by the fact that neither Doric nor Emirates had raised funds in the U.S. capital markets before and that the legal structure required to do so would be new and untested.

Working closely with Doric, Emirates and Airbus, Goldman Sachs developed a solution based on a financing concept used in the United States. Under the plan, the transaction would involve an offering of dollar-denominated securities known as Enhanced Equipment Trust Certificates, or EETCs. These securities, which use the aircraft as collateral, are commonly employed by American carriers and are traditionally sold in the U.S. bond markets. A recent international treaty had enabled the same kind of collateral arrangement outside the United States; given this development, the Goldman Sachs team saw an opportunity to use EETCs in countries that had signed the treaty.

In June, the $587.5 million transaction was quickly oversubscribed, as global institutional investors seized the opportunity to acquire long-term, dollar-denominated assets. The deal attracted investors from Europe and Asia, a first for an EETC offering. The success has not only enabled Emirates to achieve its immediate business objective, but it also enabled us to introduce a new way to bring companies from growth markets into the global capital markets. 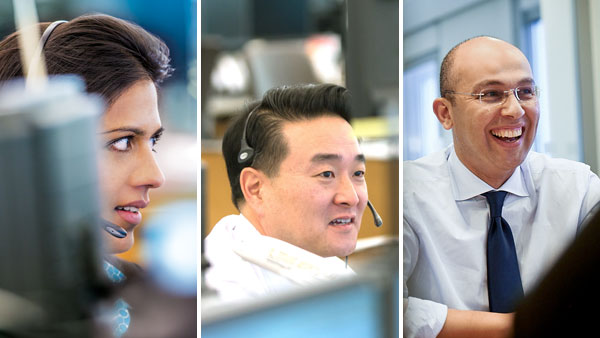 Opening the door to global capital

Doric and Emirates’ historic financing was more than a standard bond offering. It was a landmark deal that continues to help connect growth market airlines and global investors, according to three investment bankers who worked on the deal.

Q: With whom was the firm working?
Tilton: Three constituents: Doric, the leasing company; Emirates, the airline; and Airbus, the manufacturer.

Q: What was the mission?
Al-Ali: To find a way for Doric to purchase planes, now that traditional lenders – European banks – were increasingly difficult to tap. For Doric and Emirates, capital markets were obviously the next step – particularly the U.S. market, the world’s largest and most liquid.

Q: What made this unique?
Tilton: The fact that we were dealing with so many firsts. The A380, the world’s largest commercial aircraft, had never been financed in the United States before, and Doric, a relatively new company, was an unknown there. Emirates, the ultimate user and credit, had never raised money in the United States either, and the transaction would rely on protections given by a special treaty in the United Arab Emirates that U.S. investors had not relied on before. So we needed a solution that would overcome all the challenges.

Q: What was the biggest challenge?
Tilton: For investors, perceived risk. “What if something goes wrong? Can I retrieve the plane and sell it to get my money back?” That required laws that specifically gave investors this right – laws that exist in the United States and make collateralized instruments like EETCs common for United States-based carriers.

Lee: The thing is, we now had that framework because of the Cape Town Convention, a treaty that bound countries that signed to a similar set of rules. Because the United Arab Emirates had signed, there was no reason we couldn’t use EETCs – or that investors wouldn’t be interested. But that was yet to be tested.

Q: How did you start?
Lee: By mapping out everything that had to go right, from positioning the A380 as an asset to creating an instrument for a leasing company many investors were not aware of. Doric didn’t just want a deal, they wanted to set a benchmark – a transaction that would pave the way for many others.

Al-Ali: We knew we were doing something new, but we also knew it could be done – and that, if anyone could do it, it was probably Goldman Sachs. Our biggest advantage is a global culture based on collaboration and teamwork – the kind of thing where, if you have to solve a problem, people jump in, no questions asked.

Tilton: We had a team in Dubai covering Emirates, a team in London working with Doric, and sales teams around the world who could educate and work with investors. We also had a structuring team in New York with a lot of experience in the transport sector – and all of these people were extremely used to working well together.

Q: How did you successfully market the deal?
Lee: By focusing on the concerns of investors in each market – in Europe, it was the structure; in Asia, the Emirates brand and its business strategy; in the United States, the quality of the plane as an asset, because most Americans are unfamiliar with the A380.

Tilton: We even flew potential investors around New York airspace in an Emirates A380 so they could experience the plane and Emirates’ level of service. For most investors, this was the first time they were able to experience the quality of the Emirates brand.

Q: What was the impact of our success?
Lee: The transaction was a landmark – for our clients, for other airlines, and for Airbus, which wants to promote EETCs as a way to finance planes.

Al-Ali: Also, it was especially important for companies from the growth markets – and not just airlines. Others now see this as a creative new way to access the capital markets.

As traditional sources pull back,
capital markets step up

With a fall-off of lending from commercial banks, the traditional sources of corporate capital worldwide, more companies have turned to capital market instruments, such as bonds and convertibles, to meet their needs. While this trend is global, nowhere is it more pronounced than among corporate borrowers in Europe, where bank loans have traditionally accounted for the bulk of corporate financing, in contrast to the United States, where funding streams are typically more diverse. For investors, rising interest among companies in tapping capital markets is a plus. This is particularly true of institutional investors like pension funds and insurers, which seek long-dated assets for their portfolios to balance forecasted long-term demands.