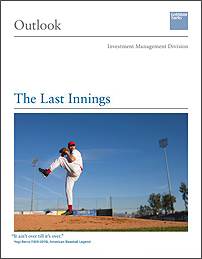 From its trough in March 2009, the S&P 500 Index has returned 249% through year-end 2015. US GDP is 14.4% higher and going into 2016, we see no recession on the horizon. This bull market is the third-longest since WWII and this economic recovery is the fourth-longest. The US has become the largest producer of oil and natural gas liquids globally, substantially reducing a historic reliance on the tinderbox that is the Middle East. The US private sector has deleveraged significantly and the gap between the US and the rest of the world continues to widen across human capital, economic and financial market metrics. Over this recovery, the US budget deficit has decreased from a high of 9.8% of GDP to 2.5%. The trade-weighted dollar measured against the major currencies has rallied 38% since its trough on May 2, 2011. The country remains the number one destination for immigration and its pace of innovation remains unparalleled. The list goes on.

Notwithstanding the positive data, many are unconvinced about the solidity of this economic recovery and the underpinnings of this bull market. The naysayers believe that secular forces have constrained and will continue to hold back the US economy and its profit-generating capabilities. The Federal Reserve’s interest rate increase last December, the first in nearly a decade, has further stoked such concerns. We take a more optimistic view. While this recovery has been the slowest of all post-WWII recoveries, we believe that it is not secular stagnation, but rather cyclical forces that account for its slow pace. These cyclical forces have now largely dissipated. Furthermore, when the Federal Reserve has historically acted early in launching a tightening cycle, such action has typically steered the economy away from a recession. We expect continued steady economic growth which will, in turn, support mid-single-digit core earnings growth.

We therefore recommend our clients stay invested at their strategic allocation to US equities. We expect modest single-digit returns for a moderate-risk, well-diversified portfolio given current equity valuations and the level of interest rates. As always, there are risks that could derail the recovery and end this bull market, but we are cautiously optimistic that the economy can withstand at least small shocks.

In the first section of this Outlook, we provide our perspective on why the US economy is on a more solid footing than generally believed and reflected in published GDP and productivity data. We review our return expectations for the next one and five years, along with our tactical tilt recommendations. We also elaborate on the key risks of 2016. In the next two sections of the Outlook, we provide our economic and investment outlook for major developed and emerging markets.