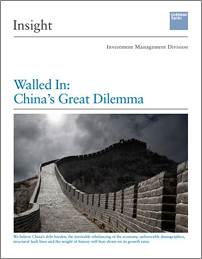 Concerns about the slowdown in China’s economy and the Chinese government’s tenuous and, many would say, opaque policy responses have been the primary driver of the last two significant downdrafts in global equity markets. Between August 10 and August 27 of 2015, a 21.5% drop in local Chinese equities as measured by the CSI 300 Index triggered a 5.5% decline in US equities as measured by the S&P 500 Index, an 8.1% drop in non-US developed equities as measured by the MSCI EAFE Index and an 8.4% decline in the MSCI Emerging Markets Index. Similarly, in the first two weeks of 2016, China jolted the financial markets with a 16.4% drop in Chinese equities, triggering an 8.0% decline in the S&P 500 Index and an 8.8% and 10.7% drop in the MSCI EAFE and MSCI EM indexes, respectively. In both instances, changes to the mechanism for setting the renminbi exchange rate have created even further uncertainty about the Chinese government’s policy objectives, since what was initially billed as a “one-off” currency change on August 11, 2015, has morphed into a series of “one-off” depreciation measures against the US dollar. We believe that investors should brace themselves for more of the same.

We expect China to remain a significant source of volatility in financial markets and commodity driven economies over the next several years. China faces a great dilemma and has limited attractive options. It faces the herculean challenge of rebalancing the economy toward consumption and a more sustainable growth path while avoiding disorderly and destabilizing adjustments. At a minimum, meeting this challenge requires successful implementation of the reform agenda set out following the Third Plenum of 2013.

China is walled in. If the reforms are implemented too quickly, the country risks a sharp slowdown. If the reforms are implemented too slowly or not at all, China risks an unsustainable increase in its debt-to-GDP ratio, which could push the country past the tipping point into economic and, in all likelihood, political instability. China is also walled in by its deep structural fault lines, ranging from weak demographics and low rankings on human capital factors such as tertiary education, to low rankings on business environment indicators such as the Heritage Foundation’s Index of Economic Freedom and the World Bank’s Ease of Doing Business Index and Worldwide Governance Indicators.

China faces these challenges against a backdrop of slow global growth and an increasing list of countries whose own currencies are depreciating against the US dollar. Its leadership must also contend with a United States that is more vigilant about protecting against alleged Chinese cyberattacks, promoting a level playing field for American companies doing business in China and pushing back against China’s military intentions in the South China Sea.

This Insight reviews the current state of China’s economy and examines the extent of China’s impact on the rest of the world’s economies and financial markets. We show that the swings in the financial markets—particularly in the United States—are excessive relative to the direct and indirect impact of a slowdown in China. We review the progress—or lack of progress—made to date on the reform agenda of 2013. We present our short-, intermediate- and long-term economic outlook for China and conclude with the portfolio implications of our views. Our 2013 Insight report, Emerging Markets: As the Tide Goes Out, contained a recommendation to our clients to reduce their strategic asset allocation to emerging market assets. This 2016 Insight report, Walled In: China’s Great Dilemma, recommends a further reduction to emerging market assets.