In the Marquee Views series, we share our views on the markets, supported by observations across content, market analytics and investor surveys on Marquee. Originally published on November 10, 2021, on Marquee’s Global Markets Insights hub. 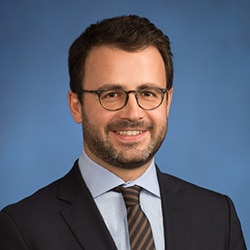 Our Views in Short
The Fed and BoE meetings in early November marked the beginning of the last chapter in this year's trading session. As central bankers showed their hands (looking through "transitory" goods inflation), strong fundamentals coupled with continued structural flows and low institutional participation rate are a perfect cocktail for a potential rip until the last event of the year: the December FOMC.

For investors have now come at an intersection: should you trade the market until year end or start positioning for what is likely to be a very different year next year? In our view, positioning for next year will be very difficult as strike drift risk will be very high in this environment. Instead, we prefer looking at levered opportunities to position for an extension of the "everything rally/anti-Taper Tantrum" (see Trade Ideas for out favorite implementations at the bottom of the piece).

i. A Divided Investor Base

Since last summer, one of the central debates (if not the only one) among institutional investors has been whether the inflation surge is transitory or whether it will prove persistent. Through our last few QuickPoll surveys, we have found that a majority still believes in the transitory nature, but also that a large fraction of the investor base sits in the persistent camp. In the latest survey in particular, we found that close to 2/3 expect Core PCE below 3% at the end of next year, while 1/3 expect it above (see chart below). But as we have highlighted in the past, we won’t know for some time whether the second round effects are materializing or not. As highlighted in GIR David Mericle and Spencer Hill’s latest deep dive into inflation, the current surge in price is almost entirely traceable back to supply demand imbalances in the durable goods sector and expectations are for a peak towards year-end and a gradual normalization in 2022. There are two other important factors that will be more difficult for market participants to gauge and risk-manage: the wage formation process and shelter. Those are slower moving and are the real drivers of second round effects, and thus will require monetary policy to be adjusted preemptively. In short, the real debate should not be whether inflation is persistent or not (we won’t know for a long time), but rather whether policy makers believe inflation risks are becoming persistent. 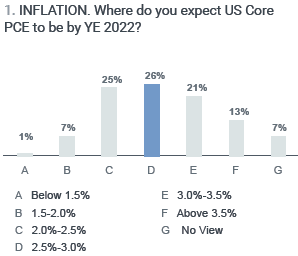 Since the beginning of the month, the FOMC, the BoE and the RBA have delivered dovish surprises leading to further easing of financial conditions in markets. One of the strongest correlations we found in the latest survey is between investors' view of inflation in 2022 and the expected first hike date (see below). Indeed, the Persistent inflation camp overwhelmingly expected an earlier first hike (Q2 ’22) while the transitory camp expected a first hike in the second half of ‘22. As Central Banks pushed back against earlier hikes, markets repriced probabilities of a June ’22 the most. On the flip side, the pace of hikes in ’23 has been steady and the hikes in '24 and '25 have collapsed (see below - now respectively at 15bps and 5bps) . This will far from close the debate, but in the short term this opens the door to a bullish repricing of certain (or most?) assets.

In one sense, the market is behaving almost as a mirror image to the 2013 Taper Tantrum:

The most surprising part of the recent anti-Taper Tantrum has been the rally in backend real yields. While the Fed has indicated it is starting to withdraw accommodation, 30y real yields are rallying to their lowest level on record! As highlighted in the second paragraph,  the market has actually cut the number of hikes for 2024 and beyond, as it sees any move to front load the hikes as ultimately limiting the length of the hiking cycle. 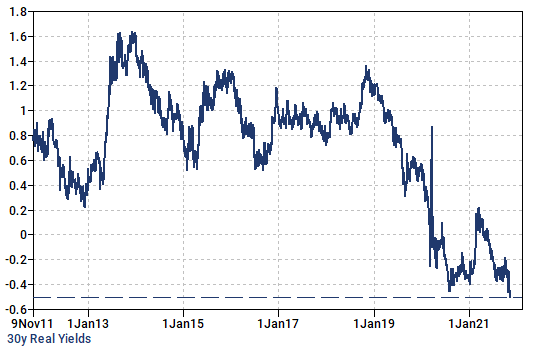 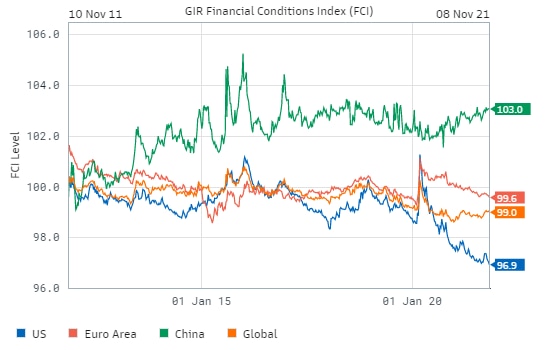 One early source of worries on the inflation front was around energy prices. We continue to be less worried than consensus here for two reasons. First, many of the geopolitical and supply driven catalysts for the rally are normalizing, such as Russian supply of gas to Europe or Coal prices in China. Second, the share of gasoline in PCE is significantly lower (around 2%) than what it was in the early 2010s (close to 4%). 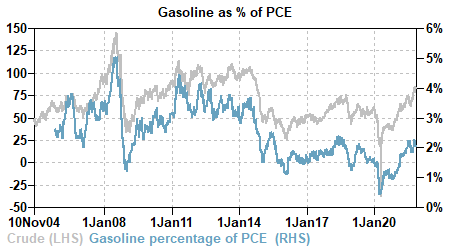 v. Main inflation risks are shelter and services... but not for 2021

As highlighted by GIR, the two remaining risks on the inflation front are wages and shelter. But those are much slower moving components and as the Fed told us they would look through goods inflation for the coming prints, so it's unlikely we'll see a materially change the inflation landscape this year. Shelter could also be a concern from a financial stability side, but the Fed's latest Financial Stability Report downplayed risks in the sector due to limited leverage and speculation. (Although, it did note how rich house prices are - close to 2005 levels - and how fast prices have risen - faster than in 2005-2006).
In short, we're keeping an eye on those risks, but they will likely only materialize next year.

Will political pressure increase in Q4? Likely, but worth noting that 1) inflation concerns are growing, but they are likely not the top concern among households yet (see Google trends and YouGov/The Economist poll below), 2) there is only one PCE print and one CPI print until the next FOMC, and 3) the market seems to have taken the view that earlier hikes translate into lower trend growth, itself leading to a flatter rates curve, thereby easing financial conditions. 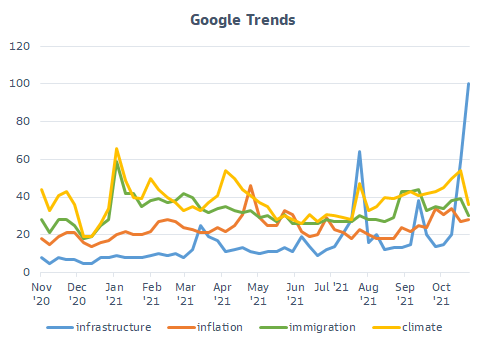 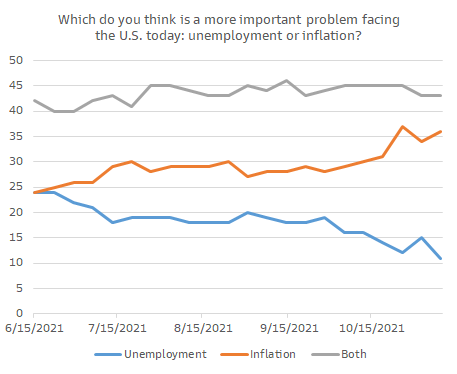 When we now look at the growth picture, we continue to see a number of positive signs. First, economic surprises have turned positive, first in the US and then globally (first graph). Second, the composition of the shift has been driven by hard data which was in negative territory for the last 6 months (second graph). Finally, the latest blockbuster ISM Services print is reinforcing the view that while peak growth is behind us, exceptional growth continues to be ahead of us. 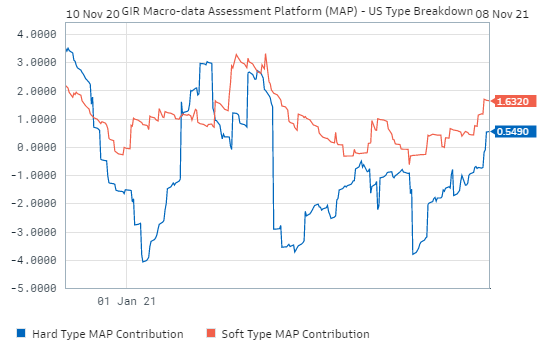 China worries have faded as markets have gotten more comfortable with the limited risks for financial instability spreading out of China slowing real estate sector. But as investors are looking into 2022, the impact on global growth could be bigger than expected. GS Research expects a slowdown of GDP growth to 4.8% and as we have seen in the October QuickPoll that soft landing scenario is in the price (65% expect growth below 6% next year). But with only 8% expecting much lower growth, the market is putting a lot of faith in policy makers' ability to stabilize the economy… Do we worry about this now? Not so much, as political stability concerns into 2022 drive policy makers into a "contain and delay" framework, but we continue to keep a cautious eye on the situation.

In addition to the growth, inflation and positive monetary outlooks, investors here have to deal with strong structural flows. In equity space, investors are likely to face a year end "buy-back wall" coupled with strong retail participation that is now also increasingly participating in the options market. In rates space, demand for the long end, and in particular in TIPS, is pushing 30y real yields to all time lows. With many macro traders capitulating in the highest conviction trades of the last few months (higher backend rates, steeper curve), structural demand sees little resistance for lower real yield.

2. Lack of institutional convictions in a stretched market

With so many tailwinds, one would wonder why investor sentiment has been steadily deteriorating this year and why confidence has dropped precipitously. As shown below, sentiment across the institutional investor base is now on aggregate bearish and propensity to take risk has dropped (with now twice as many investors likely to reduce risk than investors likely to increase risk). This lack of conviction is reinforcing our views that the recent market trends could persist into year end.

Since the beginning of the reopening trade in the Summer of 2020, we have seen a very strong consensus build around the Long DM Equities and Short DM Bonds view. In particular in 2021, we saw the other two high conviction trades (Long EM Equities and Short USD) drop out, leaving the DM Equity vs. Bonds pair as the only true consensus view.
While still very strong, the strength of that view has recently weakened and lack of follow through on the bond side combined with high valuations on the equity side surely are big drivers in this drop.

4. So what are the high quality trades here?

1. Real Assets: TIPS & Gold
The most direct expression here is in real space. Central Bankers have showed their hands and path of least resistance will be for richer real assets, including long dated TIPS and Gold. MarketStrats' Bernhard Rzymelka has written a lot about the "everything rally" as well as best implementations. For a long Gold levered trade, see here.

3. USDJPY
The current environment continues to be conductive for USDJPY and FX's Kerem Cirpan likes pairing it with Gold.

4. SPX Melt-Up
All the ingredients are there for a potential melt-up in US equities: easy financial conditions, solid growth, strong structural flows, lack of conviction. Equity Sales' Matt Fleury likes buying the dip via cheap calls into year end, and thinks owning very right wing tails for DEC22 also make a lot of sense given the strong back drop of inflows, cash on sidelines and strong EPS growth.

This message has been prepared by personnel in the Global Markets Division of one or more affiliates of The Goldman Sachs Group, Inc. ("Goldman Sachs") and is not the product of Global Investment Research. It is not a research report and is not intended as such.