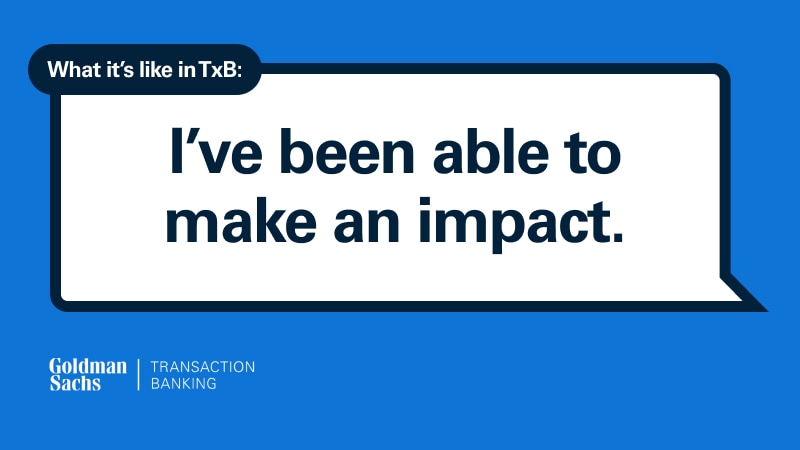 As a computer science undergraduate just finishing university and facing all-important decisions about your career, you are likely to encounter some widely held beliefs about the downside of going to work for a large, established company rather than a startup or small enterprise. When I was nearing graduation from Shiv Nadar University two years ago, I certainly heard such arguments from my peers: that big organizations are bureaucratic, anything but agile, unlikely to provide junior employees with interesting work.

I was attuned to the concerns people raised because, while I had some doors open for me at startups, I was weighing an opportunity to go to a large financial services company—Goldman Sachs. I wanted to get past the free t-shirts and mugs and the recruitment pitches to understand what my day-to-day work life might be like—which isn’t easy. I worked first as an intern at Goldman Sachs Transaction Banking (TxB) and then was offered an entry level analyst position when I completed my studies. In the end, that’s the path I decided to take.

I can tell you now that the stereotypes about big companies are not true, at least not always. My experience with Goldman Sachs is proof.

I was lucky, I realize, to be joining Goldman Sachs just as the building of a new type of transaction bank was getting going. In a sense, I found an agile fintech startup that happened to be within a large financial services company. Still, my experience has shown the hazards of giving too much weight to the conventional wisdom about going to work for a big company—and I think it may be helpful to look at some of this “wisdom” a little more closely.

Preconception No. 1: You won't be given responsibility

Perhaps true at some large companies, this absolutely wasn’t true for me at Goldman Sachs. When I became part of the TxB platform team in Bangalore, there were just two people on it. I was immediately pulled into design work, helping to make important decisions about software architecture and how we would build out the platform. I was immediately contributing to engineering decisions that would directly impact client experience.

Early on, I was tasked with building our API gateway, which is the starting point for the entire business flow of TxB. This was a crucial component in our platform as it allows the outside world to interface with our systems. I also worked on building our business’s critical messaging backbone, which is essential in ensuring all our business applications are fault-tolerant and work efficiently.

As we worked quickly toward our initial milestones, there was a lot to figure out, including decisions to be made about what components or frameworks to use and around maintaining a strong security posture and ensuring the reliability of our platform. I was right in the thick of those decisions. In other words, I have been involved from the start with the key technologies that distinguish the Goldman Sachs TxB platform from other banks’ systems, giving it real-time capabilities and availability that have never before been offered to transaction banking clients.

Preconception No. 2: Your ideas won't be valued

When I suggested that things should be done in a particular way, people listened. My views were never dismissed simply because I was less senior than someone else on the team. Even when I was an intern, people did not discount my input. People listened, provided constructive feedback and put some of my ideas into motion. Goldman Sachs really is an ideas meritocracy, a workplace where the best ideas win out.

I also had freedom—and encouragement—to work directly with some of our external software vendors to solve novel technical challenges such as building cross-account connectivity for the managed streaming framework we implemented and adding first-class mutual-TLS authentication support for our API gateway solution.

Preconception No. 3: You won't be able to make an impact

Another thing I’ve done during my relatively short tenure was to work on a business application for one of TxB’s first clients. I was part of a small team—we were just a half dozen people—to quickly build a capability the client needed that we didn’t have yet. This was high impact work, helping to demonstrate both the capabilities of our platform and the commitment we had as a business to the needs of clients.

Another area where I’ve been able to make an impact is in the technical community. I’ve up-streamed improvements to popular open-source tools that we use in the firm—something I’m very passionate about. I’ve also shared our learnings at popular developer conferences such as AWS re:Invent. This has been possible not just because Goldman Sachs allowed and encouraged me to attend and present, but also because the work we are doing is cutting edge. As we build our cloud-first, API-based platform, we are doing things that are new in this industry, and people are interested.

One of the principles embraced by Goldman Sachs as a firm is that we offer strong talent the opportunity to move ahead more rapidly than is possible at most other places. My employment at Goldman Sachs TxB has certainly proved the principle. Early in my career I have been trusted with responsibility, and I have been able to grow professionally because my work has been impactful. I’m not alone in this: There are similar success stories to tell elsewhere within TxB and across the firm.

The platform team in Bangalore has expanded to over 30 engineers, committed to solving the ever-growing set of challenges that come with each new product and business partnership, and there’s further growth to come. Seeing TxB take off and become the successful, booming business it is today has been a lesson in what’s possible when an organization makes full use of the collective talents of its employees. And it’s been an exciting career journey for me.