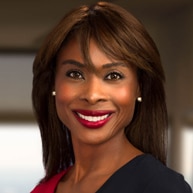 Asahi Pompey is Global Head of Corporate Engagement and President of the Goldman Sachs Foundation. She is a member of the Management Committee, the Global Inclusion and Diversity Committee and a sponsor of the Firmwide Black Network.

Prior to assuming her current role, Ms. Pompey was Co-Chief Compliance Officer of Goldman, Sachs & Co and Global Head of Investment Banking Division Compliance, and had responsibility for conduct risk. She joined Goldman Sachs in 2006 and was named Managing Director in 2010 and Partner in 2018.

Prior to joining the firm, Ms. Pompey was an associate at Cleary Gottlieb Steen & Hamilton, where she worked in the New York and Frankfurt offices.

Ms. Pompey serves on the Board of Managers for Swarthmore College. She also serves on the Advisory Boards of Forbes'  Next 1,000, Glamour  Women of the Year and the Milken Center for Advancing the American Dream.