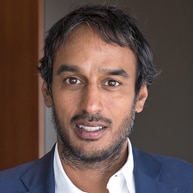 Ashok Varadhan is Co-Head of Global Banking & Markets. He is a member of the Management Committee and Firmwide Risk Council.

Mr. Varadhan joined Goldman Sachs in 1998 in Swaps Trading. Prior to assuming his current role, he served as Global Co-Head of the Global Markets Division. Before that, Mr. Varadhan held various leadership positions in Rates, Currencies, Emerging Markets and Commodities before ultimately becoming Global Head of Macro Trading in 2012. He was named Managing Director in 2000 and Partner in 2002.

Prior to joining the firm, Ashok was a Vice President in Swaps Trading at Merrill Lynch.