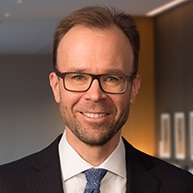 Jan Hatzius is Head of the Global Investment Research Division and the firm's Chief Economist. He is a member of the Management Committee and the Client and Business Standards Committee. Prior to assuming his current role, Mr. Hatzius was Head of Global Economics and Markets Research. He joined Goldman Sachs in the Frankfurt office in 1997 and transferred to New York in 1999. He was named Managing Director in 2004 and Partner in 2008.

Prior to joining Goldman Sachs, Mr. Hatzius was a research officer at the London School of Economics.

Mr. Hatzius is the No. 1 ranked global economist in the annual Institutional Investor Global Fixed-Income Research Team, a position he has held in the global or US category for the past decade.

He is a member of the economic advisory panels of the Federal Reserve Bank of Chicago and the Congressional Budget Office.