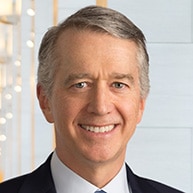 Previously, Mr. York served as Global Head of Wealth Management, including PWM, Ayco and Personal Financial Management. Prior to that, he was Head of PWM Americas. Earlier in his career, Mr. York served as Co-Head of PWM in EMEA. He was based in Europe from 1995 to 2000, first as Regional Manager of the Equities Division in Frankfurt, then as General Manager of the Goldman Sachs Bank in Zurich before moving to London in a European-wide capacity. Mr. York joined Goldman Sachs in 1986 in New York PWM. He was named Managing Director in 1996 and Partner in 2000.

Mr. York serves as Vice Chair of the Board of Directors of the Network for Teaching Entrepreneurship, treasurer of the Board of Trustees at The Marymount School and is a trustee at Christ Church in New York City. He is also a member of the Chancellor's Philanthropic Council at the University of North Carolina at Chapel Hill (UNC).