Maeve DuVally: I Left Work as Michael and Returned as Maeve

A corporate communications managing director on coming out as transgender at Goldman Sachs. 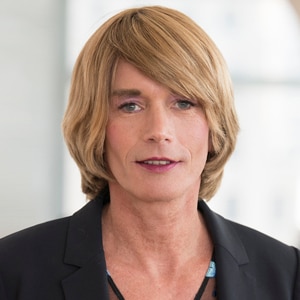 I have been out as a transgender woman in my private life since last fall. But in April, after Memorial Day, I decided to come out in my role as a managing director in corporate communications at Goldman Sachs.

The transition in the workplace has been about as seamless as possible. Goldman Sachs has created an incredibly supportive environment including almost daily interactions with our office of Diversity and Inclusion to make the process smooth; generous health insurance benefits that cover the medical side of my transition; and overwhelming encouragement from co-workers.

One unique aspect of coming out in the workplace as a transgender communications pro is the process of having to inform reporters who cover Goldman Sachs and the possibility that it might trigger stories. After all, on the Friday before Memorial Day, I left Goldman Sachs as Michael and on the Tuesday after came into work as Maeve.

I am keenly aware that it’s never good when a flak becomes the story. And thankfully, through a combination of effort and good fortune, so far in my 18-year career I have largely avoided that.

I concluded early on that coming out at work was tantamount to coming out publicly and therefore I was not especially concerned with stories being written about this process.

As a matter of fact, some of the reporters who cover Goldman Sachs were among the first people I told professionally. I talk to these reporters on a daily basis and they’ve almost become friends. So it made sense to tell them early on.

At a social gathering with journalists in early May, I told a New York Times reporter that I was transgender and would be coming out at work. She called me several days later and indicated an interest in writing something about my transition within Goldman Sachs.

I did not expect to get any special treatment. But I hoped and believed that my philosophy of treating reporters respectfully had generated the type of goodwill whereby nobody would attempt to position the transition in a bad light.

We made the decisions around this story as we would any story, and included both Jake Siewert, global head of communications, and another experienced press officer who handles human resources matters.

A lot of the content for the story was personal and I had discretion to share that information. But I was keenly aware of my lack of objectivity for this story and therefore was happy to have additional support from my colleagues.

After the story ran, I received an overwhelming amount of encouragement from people in both my personal and professional lives, including reporters and other PR pros. I’m now trying to turn my attention back to my normal job; helping manage stories for others at Goldman Sachs.