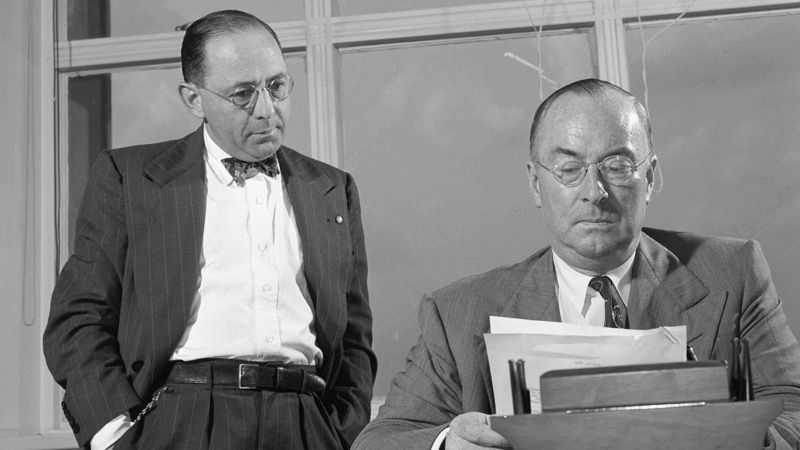 In May of 1941, Sidney Weinberg took a leave of absence from Goldman Sachs to serve as assistant director of purchases in the Office of Production Management (OPM) in Washington, DC. The Office was created to prepare the United States for wartime mobilization. After the United States entered World War II, President Roosevelt established the War Production Board (WPB) in January 1942, replacing the OPM. Sidney Weinberg became assistant to the Chief of the OPM’s (later the WPB’s) Bureau of Industry Advisory Committees and, later, assistant to the Chairman of the Board. Weinberg’s “principal assignment” was “the procurement of executive personnel for the War Production Board,” for which he took a salary of US$1 per year.

On the WPB, Weinberg brought his business acumen to bear to assure “to the greatest degree possible essential production for war and for minimum civilian requirements.” He also helped coordinate a “talent pool” matching private citizens with expertise in different areas to open positions in the government during World War II. Weinberg went back to Goldman Sachs in August 1943 but returned to the WPB as vice chairman of Special Programs from June to September 1944.

This was the second time Sidney Weinberg would take a leave of absence from Goldman Sachs to serve his country. During World War I, Weinberg enlisted in the Navy, serving as a cook due to his poor eyesight. He would rise to finish his service as Assistant Special Agent of the Navy Intelligence Department and the War Trade Board, and Deputy Collector of Customs at Norfolk, Virginia with the rank of Chief Boatswain’s Mate.

During World War II, the WPB required the addition of top executives in manufacturing, industry and finance from across the country. To assemble this talent, Sidney Weinberg personally visited his extensive network of CEOs, insisting they only send their top performers. He was seen as being uniquely suited to the task since, according to the WPB, “Sidney J. Weinberg is reputed to know more executives in American Industry than any other man in the United States.” In 1933, Weinberg had helped form the Business Advisory Council, a nonpartisan board created to provide advice and insight to the federal government from top business leaders.

Sidney Weinberg’s efforts to coordinate resources and production were honored with the Medal for Merit, awarded by the US War Department in 1946. Weinberg had long held that “government service is the highest form of citizenship.” While Weinberg had declined other federal appointments – including a 1938 offer to serve as the Roosevelt administration’s ambassador to the Soviet Union – he said of his wartime service, “I’ll never take a job in government in peacetime, but I’ll take any job in time of war.”