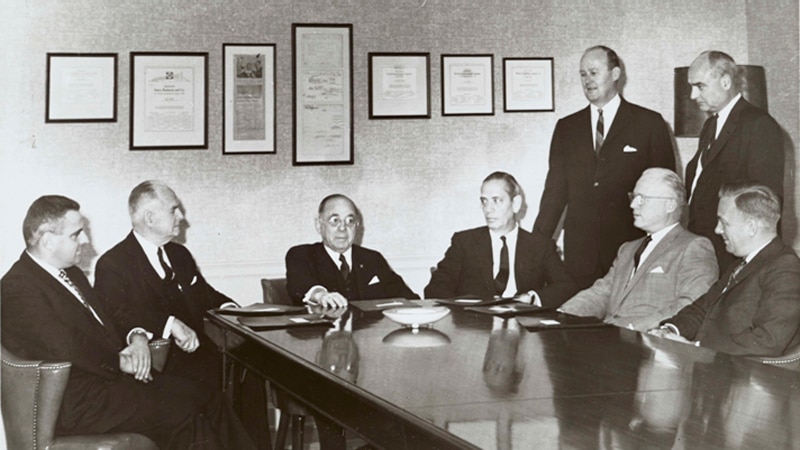 In the mid-1960s, Goldman Sachs senior partner Sidney Weinberg was living and working in midtown Manhattan. While his presence was very much still felt at Goldman Sachs’ offices downtown, particularly in the firm’s corporate finance area, Weinberg was not intimately involved in the firm’s day-to-day operational matters. This was increasingly falling to Gus Levy, a partner who headed the firm’s trading business and was well known on Wall Street for setting records in the relatively new discipline of block trading.

At the time, Goldman Sachs recently had hired a senior partner away from Coopers & Lybrand named George Doty to join the firm as a partner. Doty had a strong background in operations and fiscal discipline and a keen focus on managing business risk. When he joined Goldman Sachs, Doty insisted that the firm establish a Management Committee—something that had not previously existed. Among the Committee’s initial eight members were Weinberg, Levy and Doty, along with John Whitehead, who had instituted the firm’s Investment Banking Services group in 1956 and would eventually become co-senior partner of the firm with John L. Weinberg.

In its early stages, the Management Committee limited its activity to new issues and other corporate finance transactions. The meetings took place in Gus Levy’s office approximately every week, reportedly with attendees standing because Levy, who had little patience for long meetings, thought that this would make the meetings shorter. As the Committee continued to serve as the firm’s senior-most leadership group in the ensuing years, its charter expanded to encompass all issues that did not require a vote by the full partnership or a partner’s individual consent.

Between 1995 and 1999, the Management Committee was replaced by a newly formed, smaller Executive Committee. Then-co-heads Jon Corzine and Hank Paulson sought to streamline the executive function within a smaller group and complement it with two additional new committees focused on more targeted areas: the Partnership Committee and Operating Committee.

Following the firm’s initial public offering in 1999, however, the Management Committee was resurrected to comprise the heads or co-heads of the firm’s principal business units. Convening every Monday morning, the Committee remains a critical part of the firm’s governance structure, with key responsibility for policy, strategy and management of all of Goldman Sachs’ businesses.