In November 1972, the Dow Jones Industrial Average climbs to 1,000 units for the first time in its history, a milestone 76 years in the making. 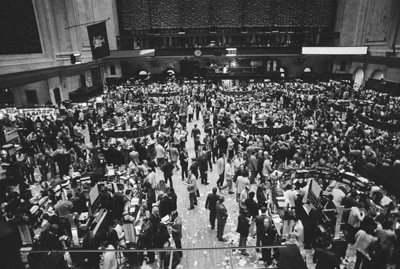 The day the DJIA passed the 1,000 mark, a total volume of 20.2 million shares was traded. At the time, institutional investors such as mutual funds, pension funds, and insurance companies accounted for 60 percent of the volume traded on the New York Stock Exchange. Brokers and analysts expected that the 1,000-point milestone would attract individual investors back to the market.

In 1972, Goldman Sachs was involved in the public offerings of common stock for Baskin-Robbins Ice Cream Company, Dunkin-Donuts Inc., and Whirlpool Corporation, among others. That year, the firm managed or co-managed US$6 billion in public offerings of securities of leading American and international companies, and US$3.4 billion in public offerings for nearly 100 governmental entities in the United States and overseas. The firm had 45 general partners, 1,500 employees, and offices in New York, Boston, Chicago, Dallas, Los Angeles, Philadelphia, St. Louis, San Francisco, Detroit, Memphis, and London.