In 1976, John C. Whitehead and John L. Weinberg were named co-heads of Goldman Sachs.  When Whitehead served as head of the firm’s Investment Banking division, he noted the rapid pace of growth, calculating that in a matter of a few years, half of the firm’s employees would be new. Concerned about the implications of this pace of growth for the firm’s distinct culture, Whitehead sat down with a legal pad on a Sunday afternoon in the spring of 1979 and drafted a set of key principles that defined, in his mind, what Goldman Sachs stood for and what all new employees should understand about the firm.

Whitehead circulated a draft of what he initially titled a “Statement of General Principles” to all of the firm’s partners on April 18, 1979 for their review and comments. In his introduction, Whitehead wrote:

“In earlier eras of the firm’s history, these principles could easily be passed along by example and by word of mouth. Now, as we have grown in size and in complexity, it seems appropriate to set forth in writing those policies and principles which have served the firm well over the years and which we expect will guide the actions of all of our people in everything we do in the firm’s name.” 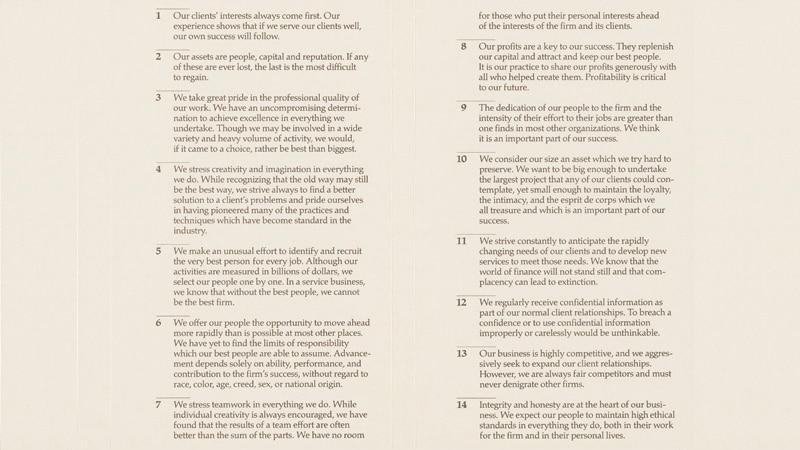 Once finalized, copies of Goldman Sachs’ Business Principles were distributed to all of the firm’s employees in the summer of 1979. Key themes included the importance of prioritizing clients and their interests above all else, integrity, innovation and teamwork. From that point forward, every new employee joining Goldman Sachs would receive a copy of the Business Principles as part of the onboarding process. They are prominently featured in each of the firm’s annual financial reports.

Over the years, two changes were made to Goldman Sachs’ Business Principles. In 1998, in anticipation of the firm’s initial public offering, they were revised to address a new constituency: shareholders. Business Principle #3 was modified to begin, “Our goal is to provide superior returns to our shareholders.” Later, in 2001, language was incorporated into the seventh Business Principle to underscore the importance to the firm of building and supporting a diverse and inclusive workforce. “Being diverse is not optional;” read the new language, “it is what we must be.”

More than four decades after they were put down on paper, Goldman Sachs’ 14 Business Principles continue to be elemental to the firm’s identity and the common set of values shared by its employees around the globe.