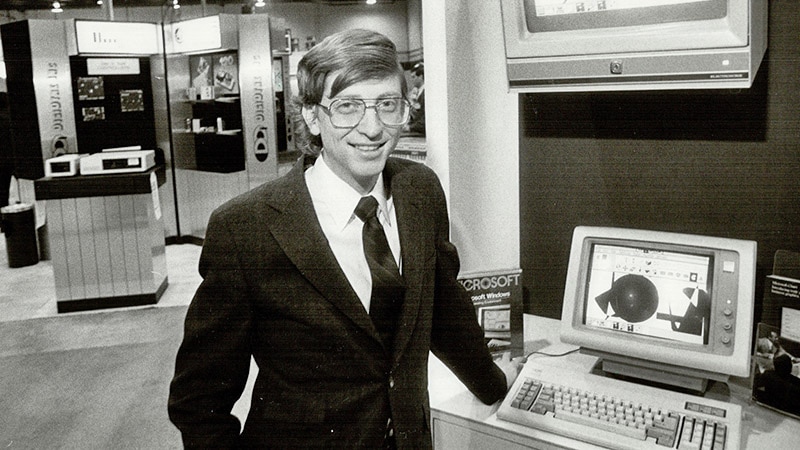 Goldman Sachs acts as book running manager of the initial public offering for software company Microsoft Corporation. Generating US$61 million for Microsoft, it is dubbed by many analysts “the IPO of the year” in 1986.

Microsoft was founded in 1975 in Albuquerque, New Mexico, by childhood friends and fellow college dropouts William H. Gates (age 19) and Paul Allen (age 22). Microsoft relocated to Bellevue, Washington, in 1979. In 1981, the software company licensed its MS-DOS operating system to IBM for its first personal computer (PC), propelling Microsoft ahead of its competitors by making its software the industry standard in computing platforms. For every PC sold, a royalty was paid to Microsoft. Most manufacturers of PCs licensed MS-DOS as their operating system, generating vast revenues for Microsoft and making MS-DOS the worldwide standard for desktop computing. In November 1985, Microsoft released Windows, a multitasking operating environment with a novel graphical user interface. One year later, the company moved to Redmond, Washington.

By the mid-1980s, Microsoft was one of the three “giants” in the personal software industry, along with Lotus Development Corporation and the Ashton-Tate Company. In 1986, Microsoft was the only one of these three that was not publicly traded. Bill Gates would have preferred to keep the company private, but an expansive employee stock option policy meant that Microsoft was fast approaching 500 private stockholders, which would trigger the need to register with the Securities and Exchange Commission (SEC).

When Microsoft ultimately made the decision to pursue a public stock offering, Goldman Sachs and Alex. Brown & Sons were selected as co-managing underwriters following an extensive vetting process. Goldman Sachs was book running manager of the IPO, whose underwriting syndicate would ultimately include 103 firms.

Two days before the Microsoft IPO, Sun Microsystems, another tech company, went public amidst market volatility. When Goldman Sachs and Alex. Brown initially recommended an offer price of US$17-US$20 per share, Gates made the atypical move of suggesting a lower range of US$16-US$19, the lower price all but guaranteeing that the underwriters would not need to go below it to sell the shares. By the end of the Microsoft roadshow, however, the markets had surged ahead further and the list of buy orders from potential institutional investors was so strong that Goldman Sachs suggested that both Gates’ price range and the number of shares to be sold would have to be raised. In the end, Microsoft and the underwriters agreed to set the IPO price at US$21.

Given the high demand, Microsoft sold an additional 295,000 shares over and above the 2.5 million it had planned to offer. By the end of its first trading day on March 13th, 1986, approximately 3.5 million shares of Microsoft stock had traded, and the price stood at US$28. The highly successful 1986 offering (dubbed “the IPO of the year” by many analysts) generated US$61 million for Microsoft (US$140 million in 2019 dollars), granting the software giant a market capitalization of US$777 million (US$1.78 billion in 2019 dollars).

Microsoft and Goldman Sachs’ relationship deepened over the years. Goldman Sachs was lead underwriter of Microsoft’s issue of US$980 million of income-yielding convertible-preferred stock in 1996 (US$1.6 billion in 2019 dollars), and the firm advised Microsoft in its US$1 billion acquisition of Navision in July 2002. In September 2012, Goldman Sachs acted as joint book runner as Microsoft tapped the debt markets for just the second time in its history, taking advantage of record low interest rates and raising US$4.75 billion in four tranches.

Microsoft would go on to become one of the most valuable companies in the world by equity market capitalization in 2018. The Microsoft IPO strengthened Goldman Sachs’ position as a leading banker to software and other technology companies, and in the decades that followed, the firm would further its reputation as a strategic and trusted advisor for innovative technology companies in markets around the world.