The Shanghai Stock Exchange Reopens in 1990 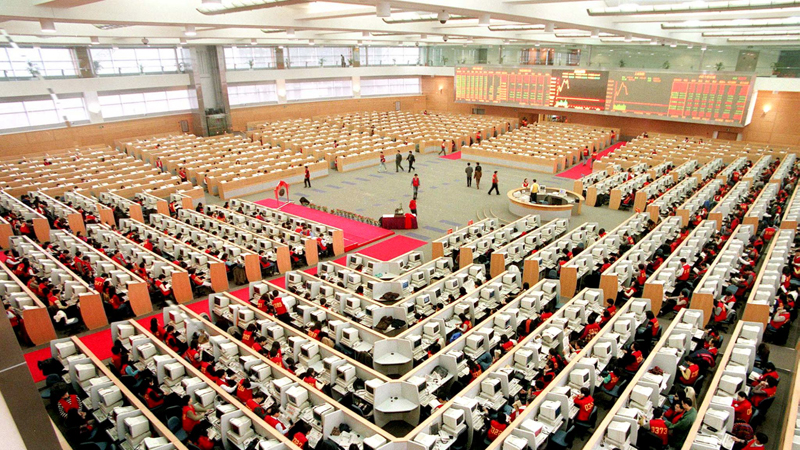 Closed in 1950 after the Communist revolution, the Shanghai Stock Exchange restarts operations in December 1990, cementing the growth and development of capital markets in China.

Since the mid-nineteenth century, Shanghai has been the most important financial center and cosmopolitan city of mainland China. Situated midway down the Pacific Coast at the mouth of the Yangtze River, the port bustled with trade and capital flows. Securities trading in Shanghai went back to the late 1860s, when the shares of local and regional companies were listed in business newspapers. In 1891, American, British and French businessmen founded the Shanghai Stock and Sharebrokers Association, the first stock trading organization in China. In 1904, the Association applied for company registration in Hong Kong and was renamed Shanghai Stock Exchange. Outside brokers formed another Stockbrokers Association in 1909 in Shanghai’s International Settlement. Eventually, the two associations merged and formed the Shanghai Stock Exchange in 1928.

The Shanghai Stock Exchange was the largest equities market in Asia until the Communist revolution in 1949. It was integrated with the New York Stock Exchange, with orders between the two cities realized via cable and radio in sixteen minutes in 1937. The Shanghai Stock Exchange suspended operations on December 8, 1941, when the Japanese occupied the International Settlement. The Exchange resumed operations in 1946 until the Communist revolution, and was liquidated by November 1950.

In the 1980s, the issue and trading of securities in China restarted. However, the prices of equities were fixed by the Chinese government. Distributed by state-owned enterprises to employees, stocks did not represent ownership, but simply the promise of a dividend. The trading of financial assets was also rare, with very few stocks and bonds listed in markets across China. The same stock could have different prices in different trading centers due to the lack of communication and information technologies.

In August 1986, the People’s Bank of China established over-the-counter markets in Shanghai and Shenyang. Soon, other markets followed in Beijing, Wuhan and Guangzhou. In April 1988, the Chinese government allowed open trading in national debt bonds. Shanghai had a small stock-trading counter for cash purchases and sales and resales of government bonds, with prices determined by supply and demand.

The lack of securities laws greatly limited the size of stock and bond markets. Acknowledging the importance of securities for the financial modernization of the country, the People’s Bank of China and the Ministry of Finance created an independent research group called the Stock Exchange Executive Council to formulate recommendations for the development of capital markets. In 1990, the People’s Bank of China authorized the establishment of two national stock exchanges in Shanghai and Shenzhen, making China the second socialist country to create a national stock exchange after Hungary.

On December 19, 1990, the Shanghai Stock Exchange reopened, the same year as the development of the financial hub of East Shanghai (Pudong) started. The Shanghai Stock Exchange restarted operations in the former Pujiang Hotel on the city’s waterfront and had computer terminals linked to other trading counters in the city and in cities around China. On July 15, 1991, the Exchange launched its first stock index.