In 1991, the firm becomes a member of the Frankfurt Stock Exchange, signifying its commitment to the German marketplace. 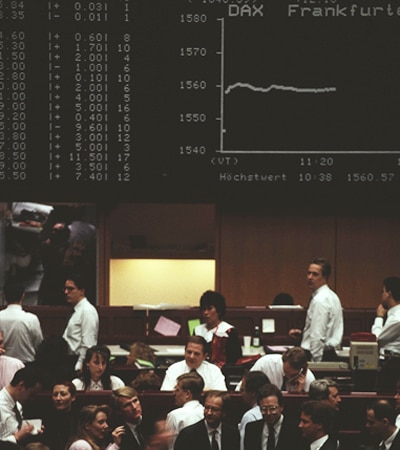 In 1991, Goldman Sachs became a member of the Frankfurt Stock Exchange. The move reflected the firm’s increasingly global presence as well as the opportunities specific to Germany.

Only a year earlier, the firm had opened its Frankfurt office in the iconic MesseTurm (“Trade Fair Tower”), the tallest building in Europe at the time. In Frankfurt, the firm would be at the nexus of several seismic shifts in the European economy. These included German reunification (1990), the wider fall of Communism across Eastern Europe and, with it, economic liberalization and the privatization of state-owned enterprises. With reunification, Germany, by then the world’s third largest economy, experienced a 30 percent increase in population.

Goldman Sachs was already an important presence in Germany at the beginning of the decade, serving as the leading adviser to the Treuhandanstalt, the agency established to privatize significant sectors of the East German economy.

In 1991, Goldman Sachs & Co. oHG (offene Handelsgesellschaft, or general partnership) had a staff of 41. By 1992, the Frankfurt staff had grown to 100. In addition to Frankfurt, the firm had full offices on the continent in Paris, Madrid, Zurich and Milan.

Becoming a member of the Frankfurt Stock Exchange was a milestone moment in the firm’s growth in Europe and Germany in particular. By 2019, the firm was one of the leading international investment banks in Germany. Goldman Sachs AG would hold a German banking license and become a member of the Association of German Banks (Bundesverband deutscher Banken). In addition, Goldman Sachs companies would eventually include members of the Frankfurt and the Stuttgart Stock Exchanges, the European Energy Exchange in Leipzig and the German Federal Bond Consortium (Bundesanleihe-Konsortium).