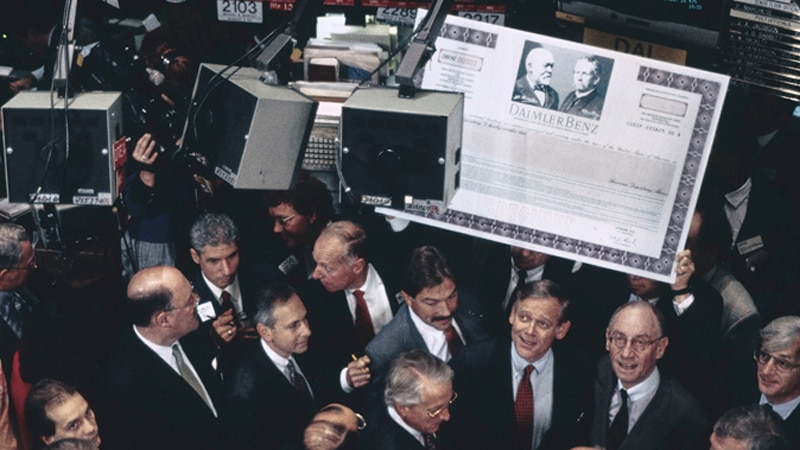 In post-unification Germany, Daimler-Benz looks to the international investment community for funding with its historic 1993 listing on the New York Stock Exchange.

On October 5, 1993, Daimler-Benz AG became the first German company to list on the New York Stock Exchange (NYSE). Goldman Sachs served as lead advisor, along with Deutsche Bank – Daimler-Benz’s primary banker and its main shareholder – in the listing. The move reflected the automaker’s desire to establish a financial presence in its largest market outside of Germany and gave the company increased flexibility to use the international capital markets as a source of financing.

For its NYSE listing, Daimler-Benz – the largest industrial company in Germany – adapted its accounting methods to follow Generally Accepted Accounting Principles (GAAP), as required by the Securities and Exchange Commission (SEC). The listing in the United States was another important step in the internationalization of Daimler-Benz, as the company had listed its stock on the Tokyo and London exchanges in 1990 and those of Vienna and Paris in 1991. Its stock was also listed on the eight German stock exchanges and since January 1977 in Basel, Geneva and Zurich. The international investor community was becoming increasingly important to Daimler-Benz as reunification efforts within Germany continued to consume a growing share of domestic investment.

In February 1994, Goldman Sachs (jointly with C. J. Lawrence/Deutsche Bank Securities Corporation and Merrill Lynch & Co.) sold 1.725 million Daimler-Benz shares owned by Deutsche Bank in the United States. The US$700 million trade (US$1.19 billion in 2019 dollars) was the first public placement of German stock in the United States. In June of that year, Goldman Sachs was also a member of the underwriting group, international marketing coordinator, and member of the international selling group of a DM3 billion (US$1.82 billion, or US$3.08 billion in 2019 dollars) global rights offering for Daimler-Benz, the largest capital raise in postwar Germany. Even more significantly, the firm was an advisor in Daimler-Benz’s 1998 restructuring, as well as its US$36 billion purchase of American automaker Chrysler in 1999 and the merger of DaimlerChrysler Aerospace AG (DASA) with French company Aérospatiale-Matra in 2000.