In 1993, Goldman Sachs serves as exclusive advisor to Hutchison Whampoa Limited and the Li family in the largest merger to date in the Asian media industry: Hong Kong-based Star TV and Rupert Murdoch’s News Corporation Limited.

Throughout the 1970s and 1980s, Goldman Sachs steadily broadened its global footprint, establishing a physical presence in key financial centers in Europe and Asia. In 1983, the firm opened an office in Hong Kong, recognizing the strategic importance of the port city as a gateway to mainland China and other parts of Asia.

Goldman Sachs’ commercial efforts in Hong Kong were built upon strong relationships. One such relationship was with the Li family. Li Ka-shing, born in 1928, emigrated to Hong Kong from mainland China in 1940. An instinctive entrepreneur, Li progressed rapidly from being a salesman to founding his own plastics company (Cheung Kong Industries) and investing in real estate, eventually becoming Hong Kong’s largest real estate developer. In 1979, he acquired the conglomerate Hutchison Whampoa. Li had two sons, the youngest of whom, Richard, launched a satellite programming venture in 1991 focused on 38 nations in Asia and the Middle East. At the time, there were only two traditional broadcasters in Hong Kong, three in Malaysia, and one in Singapore. Richard Li’s venture, called Star TV, was developed out of Hutchison Whampoa and was jointly owned by the conglomerate and the Li family. 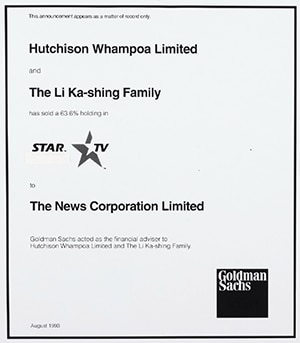 Although it had yet to turn a meaningful profit, the fledgling company caught the eye of media mogul Rupert Murdoch, who saw tremendous growth potential for satellite television in Asia, where populations and disposable income were on the rise and programming was sparse. Murdoch’s News Corporation had recently seen its February 1993 attempt at taking a minority stake in Hong Kong television station Television Broadcasts (TVB) thwarted by local regulators and was seeking other avenues to access the Asian broadcasting market.

Around this same time, Goldman Sachs learned from Richard Li that Star TV was considering raising funds through a private placement. The firm advised Li that identifying a strategic investor would better serve Star TV, and the Li family appointed Goldman Sachs as its exclusive advisor in the search for a buyer. While Rupert Murdoch and Li Ka-shing had previously discussed a possible deal earlier in 1993, they had been unable to come to an agreement on it.

In July of 1993, Goldman Sachs succeeded in brokering a deal between the two parties whereby News Corporation would purchase a 63.5 percent interest in Star TV for US$525 million. At the time, it was the largest merger to date in the Asian media industry. On the day after the sale, Goldman Sachs executed a related block trade for News Corporation involving 16.5 million shares of Pearson PLC worth US$114 million. Several weeks later, the firm helped Hutchison Whampoa and the Li family sell American Depositary Shares of News Corporation valued at close to US$300 million that it had received from the Star TV deal.

Emblematic of Goldman Sachs’ ability to support the broad, sophisticated objectives of its global client base, the Star TV deal exemplifies the power of serving clients well. Among other high-profile transactions managed out of the firm’s Hong Kong office, Goldman Sachs would act as financial advisor to the Li family on numerous subsequent transactions, including Hutchison Whampoa’s US$78.8 billion reorganization in 2015 — at the time, the largest-ever M&A deal in Asia Pacific.