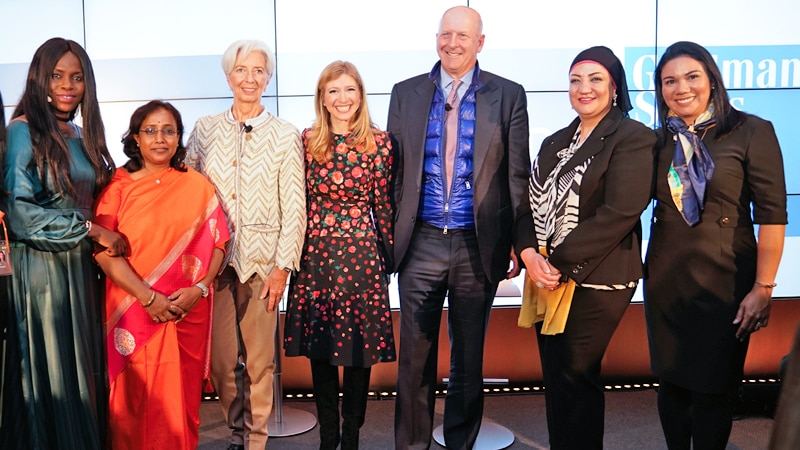 In 1999, Goldman Sachs set aside US$200 million from the proceeds of the firm’s initial public offering to fund the Goldman Sachs Foundation. Building on the firm’s long-standing tradition of leadership and public service, the foundation was established with the mission of promoting excellence and innovation in education by making grants in three principal areas: developing high-potential youth; promoting entrepreneurship, business education and leadership; and advancing academic achievement. Former co-senior partner John Whitehead was the founding chairman of the Goldman Sachs Foundation from 1999 until he passed away in 2015.

At the time of its formation, the Goldman Sachs Foundation was the sixth-largest corporate foundation in the country. It enjoyed close ties with Goldman Sachs early on: three of the foundation’s initial seven trustees were executives of the firm, and within five years of its establishment, more than 500 Goldman Sachs professionals had stepped forward to serve as coaches, mentors, board members, and judges at competitions for foundation-related initiatives. In 2005, the foundation moved its offices from Midtown Manhattan to Goldman Sachs’ headquarters at 85 Broad Street in the Financial District, further strengthening linkages with the firm.

In its first eight years, the Goldman Sachs Foundation leveraged its position at the nexus of education and finance to identify and fund selective investment opportunities aligned with its mission. For example, in 2000 it partnered with the Institute of International Education to sponsor the first annual Global Leadership Institute, convening 50 selected second-year university students from around the globe for a Davos-type gathering led by a faculty of experts from business, academia, and the public and nonprofit sectors.

In 2007, the Goldman Sachs Foundation refined its focus to align further with the mission of the firm by dedicating 100 percent of its programming to local economic growth, specifically through investing in entrepreneurship. All programming was designed under the following principles: address a proven whitespace where innovation can address unmet needs; set a scalable, ambitious goal (e.g., 10,000 people served); measure results to ensure maximum success; ensure CEO and executive-level sponsorship; and engage the time and talent of the people of Goldman Sachs.

Initiatives such as 10,000 Women and 10,000 Small Businesses would soon follow – both designed to grow local economies by providing thousands of underserved entrepreneurs with greater access to a business and management education, financial capital and business support services.

In addition to proven impact, furthering public-private partnerships has been at the Foundation’s core. In 2014, the Goldman Sachs Foundation partnered with the International Finance Corporation (IFC) to create The Women Entrepreneurs Opportunity Facility (WEOF), the first-ever global finance facility for women-owned small- and medium-sized businesses. As of June 2019, WEOF had invested US$1.45 billion – far exceeding its original goal of US$600 million – and had provided capital to more than 53,000 women entrepreneurs across 33 countries in the developing world.

Looking ahead, the Goldman Sachs Foundation is focused on building on its proven model while continuing to innovate and extend its impact and convening power to help foster sustainable economic growth, stability and opportunity to communities around the world.