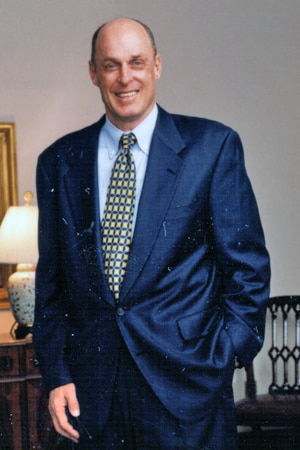 Born in Palm Beach, Florida, in 1946 and raised in Barrington, Illinois, Henry M. “Hank” Paulson, Jr., graduated from Dartmouth College, where he was named Phi Beta Kappa and honorable mention All American for football. He received an MBA from Harvard Business School in 1970. Prior to joining the firm, Hank was a member of the White House Domestic Council, serving as staff assistant to President Richard Nixon from 1972 to 1973 and as staff assistant to the Assistant Secretary of Defense (Comptroller) at the Pentagon from 1970 to 1972.

Hank joined Goldman Sachs in 1974 as an investment banker in the Chicago office, then headed by Jim Gorter. Initially focusing on clients in the Midwest, he would go on to develop strong relationships in Asia, particularly in China. Noted for his intense dedication to his clients and candor, he became a partner in 1982. Hank served as co-head of the Investment Banking Division (IBD) from 1990 to 1994, vice chairman and chief operating officer (1994 to 1998), and president (1998-1999), after Stephen Friedman retired and Jon Corzine became senior partner in 1994.

In June 1998, Hank was named co-chairman and co-chief executive officer, serving along with Jon Corzine. This would continue “the firm's long tradition of joint leadership based upon shared strategic vision and complementary personal talents and experience,” as Corzine informed in a memorandum to all Goldman Sachs employees. Hank would be named sole chairman and CEO in January 1999, leading the firm during its pivotal transition from a private partnership to a publicly-held company in 1999.

During his tenure as head of Goldman Sachs, Hank worked to preserve the partnership culture while continuing the firm’s global expansion, ultimately presiding over the greatest period of growth and change in the firm’s history since Sidney Weinberg led the firm. He helped to gain a foothold in China’s domestic financial markets, traveling there frequently. Under Hank’s watch, new language was added to the Business Principles underscoring the importance of a diverse and inclusive workforce. Among the challenges he would face while heading the firm were the terrorist attacks of September 11, 2001, their disruption of markets worldwide (already affected by the bursting of the dot-com bubble) and the devastation of parts of Lower Manhattan.

During Hank’s tenure as Goldman Sachs chairman and CEO, the firm entered into a landmark public-private partnership with the Wildlife Conservation Society to establish the Karukinka Natural Park on the island of Tierra del Fuego, Chile, in 2004.

In 2006, after 32 years at Goldman Sachs, Hank retired from the firm after being confirmed to serve as the 74th secretary of the treasury of the United States under President George W. Bush from June 2006 to January 2009. During that time, Hank would play a central role in the efforts to stabilize the financial system in the aftermath of the global financial crisis of 2008, the subject of his 2010 memoir, On the Brink: Inside the Race to Stop the Collapse of the Global Financial System. Hank has also authored Dealing with China: An Insider Unmasks the New Economic Superpower, published in 2015, and is a co-author (with Ben Bernanke and Timothy Geithner) of Firefighting: The Financial Crisis and Its Lessons, published in 2019.

Hank is the founder and chairman of The Paulson Institute, which aims to advance sustainable economic growth, a cleaner environment and cross-border investments in the United States and China. A lifelong conservationist, Hank was chairman of The Nature Conservancy Board of Directors and founded and co-chaired the organization’s Asia-Pacific Council. In 2011, Hank founded the Latin American Conservation Council, comprised of global business and political leaders, which he co-chaired until 2017.

This article was originally published as part of a series commemorating the 150th anniversary of Goldman Sachs' founding in 1869.H