Building on its own leadership in market making and clearing, Goldman Sachs acquires Spear, Leeds & Kellogg in 2000 to become one of the leading market makers of equities and options in the US marketplace.

The history of Goldman Sachs over a century and a half is one of predominantly organic growth, with few acquisitions or mergers. One of the most noteworthy of these transactions was the acquisition of Spear, Leeds & Kellogg in 2000. 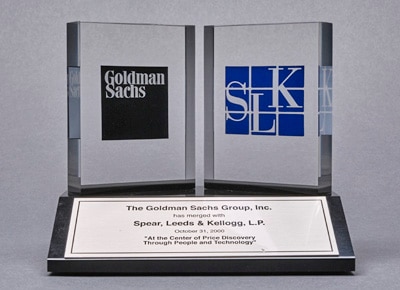 Founded in October 1931 by Harold Spear and Laurence C. Leeds, two members of the New York Stock Exchange (NYSE), Spear, Leeds & Kellogg was a leader in securities clearing and execution as well as market making — both floor-based and off-floor. At the time of the merger, it was the leading clearing firm by volume and the largest specialist on the NYSE and one of the largest market makers in Nasdaq shares. Spear, Leeds & Kellogg had rejected earlier deal alternatives, including at one point considering a leveraged buyout or launching its own IPO. Like J. Aron, Goldman Sachs had a long business relationship with Spear, Leeds & Kellogg prior to the acquisition.

For Goldman Sachs, the combination offered the opportunity to build on the firm’s leadership in market making, execution and clearing in addition to providing another window into rapidly evolving trading technology. The transaction was valued at US$6.5 billion, comprising US$4.4 billion of Goldman Sachs common stock (34 million shares) and cash.

The firm leveraged several assets from Spear, Leeds & Kellogg in the development of electronic trading platforms like REDIPlus. With the decline in specialist trading and the rise in high-frequency equities trading, Goldman Sachs sold the designated Spear, Leeds & Kellogg post on the floor of the NYSE to IMF Financial Markets, a Dutch electronic market maker, in 2014. After the sale, Goldman Sachs retained its brokerage unit on the NYSE trading floor, providing liquidity electronically for the equities listed in that market.