As lead advisors to the International Finance Facility for Immunisation (IFFIm), Goldman Sachs helps to launch in 2006 a US$1 billion bond to protect children against disease by improving health systems and increasing access to immunization.

Illustrating how the world's capital markets can be used as a force for public good and social change, in 2006 Goldman Sachs helped to develop and launch an initiative to save the lives of millions of the world's poorest children. 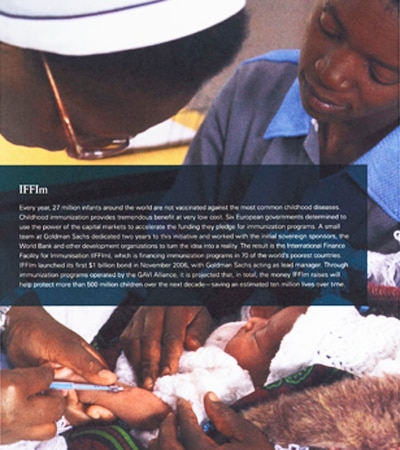 Every year, more than 20 million infants around the world are not vaccinated against the most common childhood diseases despite evidence that childhood immunization can provide tremendous benefit at very low cost. In light of this, the United Kingdom, France, Italy, Spain, Sweden and Norway determined to use the power of the capital markets to accelerate the funding each pledges for immunization programs.

For two years, a small team at Goldman Sachs worked with the initial sovereign sponsors, the World Bank and other development organizations, to transform this notion into a reality, resulting in the International Finance Facility for Immunisation (IFFIm). The facility was designed to provide a steady stream of immunization funds for programs in 70 developing countries by issuing debt in capital markets, backed by multiyear grants from sovereign donor governments.

Given long-term immunization efforts, such as worker training, are best served by matched long-term funding, the IFFIm offering would provide immunization efforts with much-needed coordinated cash flows for an extended period of time, increasing efficiency, planning and results. Goldman Sachs acted as lead manager jointly with Deutsche Bank in launching the first IFFIm US$1 billion bond in November 2006, raising the necessary financing to support immunization programs in more than 60 of the world's poorest countries.

Through immunization programs operated by the Global Alliance for Vaccines and Immunisation (Gavi), the capital raised in this and other issues was projected to help protect the health of more than 500 million children over the next decade—saving an estimated 10 million lives over time. Gavi, based in Geneva, is an international organization created in 2000 to improve access to new and underused vaccines for children living in developing countries.

In subsequent years through 2017, the IFFIm leveraged donor pledges to raise more than US$6 billion towards immunization efforts across the globe. The firm’s leadership role in helping to bring IFFIm to the capital markets is emblematic of Goldman Sachs’ commitment to leveraging its core competencies for strategic, high-impact investing and financial innovation.