On February 28, 2013, Goldman Sachs joined other Wall Street firms and corporations as well as representatives from government, advocacy groups, and religious organizations to show support for marriage equality in Washington, DC. The firm signed an amicus brief that was filed with the US Supreme Court, as the court weighed in United States v. Windsor whether the Defense of Marriage Act (DOMA) was constitutional.

DOMA was a federal law, enacted in 1996, which defined marriage as being exclusively between a man and a woman. The amicus brief was a "friend of the court" legal document that provided information about the benefits for the economy as a result of advancing marriage equality.

The specific case before the US Supreme Court involved Edith Windsor (1929-2017), who was challenging a decision by the Internal Revenue Service forcing her to pay estate taxes following the death of Thea Spyer (1931-2009), her female spouse to whom she was legally married in New York. Under federal law, heterosexual couples would not incur the same tax. 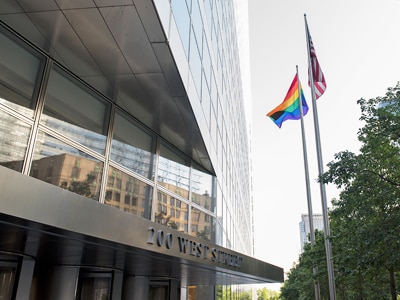 The firm’s support of marriage equality aligned with its Business Principles, specifically the importance of building, supporting and leveraging a diverse and inclusive workforce. As the firm’s seventh principle has stated since 2001, “For us to be successful, our men and women must reflect the diversity of the communities and cultures in which we operate. That means we must attract, retain and motivate people from many backgrounds and perspectives. Being diverse is not optional; it is what we must be.” In 2012, Chairman and CEO Lloyd Blankfein embodied this principle when he became the Human Rights Campaign’s first national corporate spokesperson for same-sex marriage, placing him among the first Fortune 500 CEOs to publicly support this issue.

On June 26, 2013, the US Supreme Court ruled Section 3 of DOMA to be unconstitutional in a 5 to 4 decision, declaring it "a deprivation of the equal liberty of persons that is protected by the Fifth Amendment."

Exactly two years later, on June 26, 2015, the US Supreme Court ruled in Obergefell v. Hodges that all US states recognize same-sex marriages. Goldman Sachs noted the significance of the ruling stating, “We applaud today’s US Supreme Court ruling on marriage equality, which will help families across the country, make it easier for businesses to hire and keep talented people, and promote both economic growth and individual freedom.”

In a message to its members and allies that same day, the firm’s LGBT Network echoed this sentiment. “Today’s decision comes two years to the day after the US Supreme Court struck down the 1996 Defense of Marriage Act. Goldman Sachs has been an outspoken supporter of marriage equality. We are pleased to fly the Pride flag outside of 200 West Street today in response to the decision and to highlight our continued focus on supporting the LGBT community.”