In 2001, Universal Studios Japan (USJ) opened as a joint venture between the city of Osaka, a state-backed lender, and a group of private companies. In 2005, Goldman Sachs became an investor through an investment arm, accepting JPY20 billion (US$168.6 million) in new shares out of the JPY25 billion (US$210.7 million) worth issued for private placement. With this initial investment, Goldman Sachs became the largest shareholder of the theme park with 41 percent ownership (on a fully diluted basis). USJ made its debut on the Tokyo Stock Exchange’s Mothers market for startup companies in 2007. 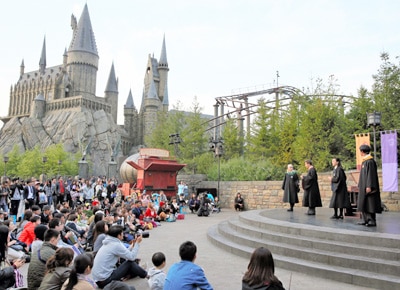 The park struggled with decreasing visitors and competition from Tokyo Disneyland. In 2009, Goldman Sachs launched a tender offer worth US$1.2 billion (JPY107.5 billion), dispelling rumors that the firm was pulling out of investment operations in Japan. Eventually, USJ would be delisted from the Tokyo Stock Exchange. In December 2013, USJ received JPY25 billion (US$242 million) from PAG, a Hong Kong-based private equity firm. After this investment round, Goldman Sachs owned 38 percent of the park (on a fully diluted basis), while MBK Partners (Seoul), PAG (Hong Kong), and US hedge fund Owl Creek Asset Management had minority stakes.

Comcast Corp’s NBCUniversal was working to catch up with 21st Century Fox, Time Warner and other global competitors. In September 2015, Comcast Corp. announced it would acquire a 51 percent stake in USJ. Goldman Sachs, MBK Partners, and former USJ’s CEO Glenn Gumpel would retain minority stakes in the theme park. The deal gave USJ an enterprise value of US$6.2 billion (JPY745 billion). The acquisition came after Comcast failed to satisfy regulators in its attempt to acquire Time Warner Cable.

In February 2017, Comcast NBCUniversal announced that it agreed to purchase 49 percent ownership of USJ from its current partners, including Goldman Sachs’ Merchant Banking Division, Glenn Gumpel, MBK Partners and Owl Creek Asset Management. The price was US$2.3 billion (JPY260 billion), valuing USJ at US$7.4 billion (JPY840 billion). Comcast NBCUniversal would own 100 percent of the theme park and make it a fully owned subsidiary by the end of April 2017.

Over the course of Goldman Sachs’ nearly 12-year investment, USJ went through a transformational change. Attendance nearly doubled, from 7.5 million annual visitors to roughly 15 million, and EBITDA more than quadrupled, from JPY17 billion (US$143 million) to nearly JPY70 billion (US$619 million). The company’s enterprise value grew over eight times during this period, from JPY100 billion (US$843 million) to JPY840 billion (US$7.4 billion). This unparalleled growth was largely a result of a complete repositioning of the park, disciplined investments in world-class attractions, and innovative marketing strategies.

Goldman Sachs also acted as financial advisor to General Electric in its joint venture with Comcast. Announced in December 2009, the US$37.25 billion transaction created NBCUniversal, a leading media and entertainment company. In 2013, Goldman Sachs advised General Electric in the US$18.1 billion sale of its remaining equity interest in NBCUniversal.