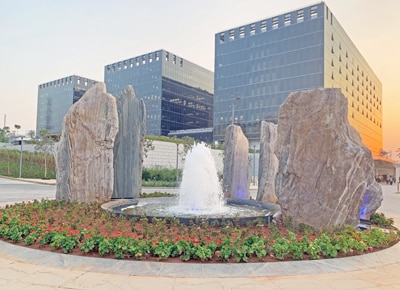 On May 30, 2019, Goldman Sachs inaugurated its newest campus at 150 Outer Ring Road in Bengaluru, India. The address commemorates both the firm’s 150th anniversary as well as the Bengaluru office’s 15 years of operation.

Reflecting Goldman Sachs’ commitment to sustainability, the campus of three interconnected ten-story wings uses energy from clean sources, such as solar and wind; it harvests and stores rainwater and reuses 100% of wastewater for landscaping, cooling and plumbing. Designed by Pei Cobb Freed & Partners, the architects who designed the firm’s global headquarters at 200 West Street in Lower Manhattan, the new office can house more than 8,600 individuals and features two and a half acres of landscaped outdoor parks.

Bengaluru is often referred to as the “Silicon Valley of India.” Its proximity to leading universities means it offers access to a large pool of entrepreneurial talent. Goldman Sachs’ presence in the city dates to 2004, and since then, the office has grown significantly, making it the firm’s third-largest by head count.