Since 2009, Goldman Sachs, along with partners from the public and private sectors, has committed over $1.9 billion through 90 projects in New York City, resulting in thousands of affordable housing units, 2.2 million square feet of retail and commercial space, expanded healthcare and community facilities and job creation. 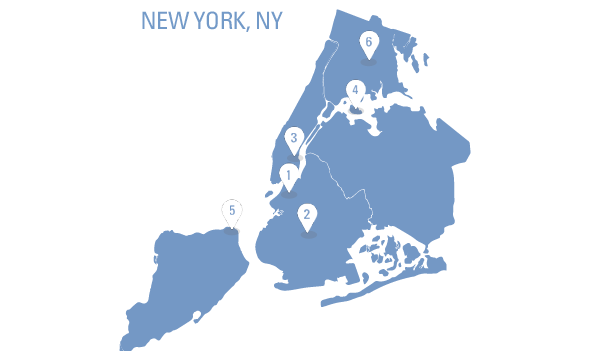 Goldman Sachs is committed to the redevelopment of the Brooklyn Navy Yard. Once the US Navy’s premier shipyard, the site languished in disuse during the 1970s and early 1980s. Through a series of investments that focus on preserving the site’s historic infrastructure while bringing in innovative and sustainable businesses, our efforts will help to return the complex to its former status as a major industrial center.

The project also includes 215,000 square feet of new construction, which will house Crye, a designer and manufacturer of camouflaging uniforms and other body armor for various branches of the U.S. Military, and Macro Sea, a shared manufacturing design and work space that will serve as a hub for learning and innovation, industry training and the commercialization of new manufacturing businesses.

Over 370 jobs are expected to be created as result of this commitment; many are expected to go to low-income workers in surrounding areas, which have suffered from high rates of unemployment and poverty as well as a decline in traditional industries.

The project contributes to the ongoing revitalization and transformation of the Brooklyn Navy Yard, which has been identified as a “top priority” project in the New York City Regional Economic Development Council Strategic Plan issued in November 2011 and a key component of New York City efforts to create additional jobs in the five boroughs.

In December 2012, Goldman Sachs committed over $80 million of capital to finance the rehabilitation of Loew’s Kings Theatre. Built in 1929, the historic, 83,000 square foot facility was restored and expanded into a modern, multi-use community and live performance venue on Flatbush Avenue in Brooklyn.

The project had been on New York City’s redevelopment agenda since 2006 and is expected to stimulate commercial activity along the Flatbush Avenue commercial corridor in Central Brooklyn, while creating 300 construction jobs and 70 permanent jobs.

Loew’s is now the largest indoor theater in Brooklyn, and serves as a landmark and source of civic pride in a transitioning community. Its presence will dramatically alter the cultural landscape of Central Brooklyn and the Greater New York City area.

In December 2014, Goldman Sachs committed nearly $200 million to Essex Crossing, a project that will transform the largest stretch of undeveloped city-owned land in Manhattan below 96th Street – totaling 1.7 million square feet – into a vibrant, mixed-use community.

The development, located near the intersection of Essex and Delancey Streets on New York’s Lower East Side, consists of nine sites, many of which have sat largely vacant for more than four decades. The three phases of the development will create:

The work is a result of a strong public-private partnership, including local community groups, the New York City Economic Development Corp. and the New York City Department of Housing Preservation and Development. Total development costs are approximately $1 billion, providing the Urban Investment Group (as the team’s lead financing partner) with significant investment opportunities.

Goldman Sachs invested in a “social impact bond” to help fund a program aimed at reducing the recidivism rate for adolescent offenders at the Rikers Island correctional facility in New York City. The initiative – in partnership with the City of New York, Bloomberg Philanthropies and MDRC – was the first transaction of its kind in the US market.

Learn more about the results of our Rikers social impact bond

The capital helped to finance improvements to UHP’s facilities in the Soundview neighborhood of the Bronx—an area hard-hit by the closing of a community health center in 2012. The loan also supported the renovation of UHP’s headquarters to respond to growing demand, now open, and several ancillary sites that are critical to UHP’s expansion.

Previously, Goldman Sachs had committed $42 million of capital in a New Markets Tax Credits transaction with UHP to finance the construction of a new 54,000 square foot facility, and to finance existing debt.

The capital raised in these two transactions helps deliver medical services to 50,000 visitors at the Soundview facility, and 20,000 new patients at UHP headquarters. The organization’s headquarters is located in a neighborhood that was designated as both a Medically Underserved Area and a Medically Underserved Population by the US Government’s Heath Resources and Services Administration.