Being Black in America

At Goldman Sachs, we continue to provide the space for our people to share their personal stories about race and identity. Through open dialogue, we stand to learn and gain an understanding of how each person’s experiences shape them. Gizelle George-Joseph, chief operating officer of Global Investment Research, reflects on racism and discrimination in the US from her perspective as a Black woman. 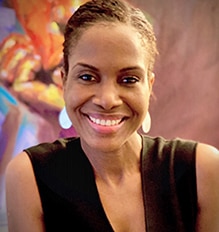 I have hesitated in the past to talk about “the Black experience” in the US because it has often felt inauthentic—growing up Black in this country is different in many ways from just living as a Black adult in this country, although for Black Americans born and raised here it is often the same experience.

But I grew up in the Caribbean on an island of 70,000 where more than 85 percent of the population was mostly of African descent, and where a Black woman, the first woman in the Americas to be elected in her own right as head of government, was my prime minister for essentially the first 15 years of my life. This is an important point; it created a foundation for a core formative experience as a child that impacted my psychological and emotional safety even into adulthood.

My father was part of the Dominica Defense Force (the army) before it was dissolved and was very involved in local politics. On a small island where people mostly look like you, you know all of the “influencers” and policing is done on a community level. You are not afraid of the cops; the cops are your friends. And particularly in my case, the chief of police was one of my family’s closest friends.

In the summer of 1999, when I was about to travel to the “states” for college, I was given my first lesson on being Black in America by friends and family who already lived here:

You will get stopped by the police. Many times.
You may or may not be given a reason why.
Ask permission to reach for your license and registration.
Remain humble, don’t argue with the cops.
Don’t make any sudden moves.
Remember that your goal is to get home alive.

But I was undeterred. I was excited to head to the land of the free, where a young Caribbean girl was told it was the place where dreams were made.

Lesson number two was from my college roommate, an 18-year-old miniscule Black American woman. I was now 1,800 miles from home and had no clue that the stories I had only read in history books about the plight of the Black American were about to become my own story.

The list goes on. And in the following years as I completed my undergraduate degree in South Carolina and then a master’s degree in Georgia, I lived through each of these experiences as if going through a checklist, no longer just a story in a book or a scene from a movie, but snapshots in my life.

When George Floyd was killed, there was a roaring in my head as I watched the calm face of the police officer as his knee crushed George’s neck for 8 minutes and 46 seconds and slowly snuffed out his life as he begged for mercy. I wanted to throw up. The seeming utter disregard for human life, for Black life was scary. I had been scared before during one-off racist interactions – the worst, when a speakerphone suddenly came on at the back of our car while pumping gas at a South Carolina station and my husband and I were called the “N” word and told that they did not like our “kind around here.” But for the first time, I truly understood what Black Americans who were raised in this country had described to me – being afraid ALL the time. What …or who…would prevent what happened to George Floyd from happening to my husband, to my brothers, to my son, to me?

One of my Black colleagues at the firm said it best: “somehow this time around it’s almost personal.”

I read an article from a few years ago about how Black children don’t get to be children in America. I have a 9-year old son with cerebral palsy and I have tried to preserve his childhood, like mine was preserved growing up in the Caribbean. He knows Black American history as stories in a book. I know the time will come when I will need to give him “the talk”, the conversation that every Black American parent has with their kids during their pre-teen years on how to survive encounters with the police and how to deal with racist interactions.

But I’m also hoping (maybe naively) that maybe this wave of support for the Black “struggle” in this country could lead to real change that will make “the talk” superfluous. Maybe another senseless killing of a Black man, this Black man, George Floyd, is the catalyst we need to mobilize the masses and effect real change. I can only hope.

Many have reached out and asked what we can do as a firm. I encouraged my colleagues to educate themselves about the current and historical issues that are central to the conversation. Let your network know that you’re an ally, that you want to lend your voice to this discussion, that you want Black America to feel safe and to know that this country is equally theirs. If you feel a little uncomfortable, that’s okay; we are all a bit outside of our comfort zones at the moment and we should all work to create a safe space as a community.

George Floyd’s 6-year-old daughter said that her “daddy [had] changed the world”. I hope that all of us can be that “change we want to see in the world” (Gandhi).