How We Celebrated Black History Month: A Recap of Events

In celebration of Black History month in the US, one of the firm’s employee affinity networks, the Firmwide Black Network (FBN), sponsored a series of events highlighting professional and cultural achievements within the black community.

Some of the events that took place over the course of February are highlighted below: 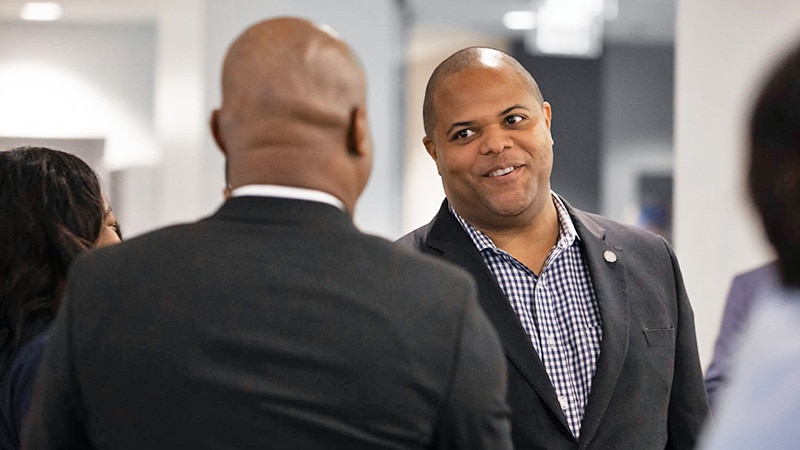 Talks at GS with Dallas Mayor Eric Johnson and Roundtable Conversation
In a session moderated by Thomas Dowling, head of Goldman Sachs’ Dallas office, Mayor Johnson discussed his career, diversity in government and economic opportunities in Dallas. Johnson also took the time to speak with local 10,000 Small Businesses entrepreneurs in a roundtable discussion on small business growth and the impact the program has had in the local market. 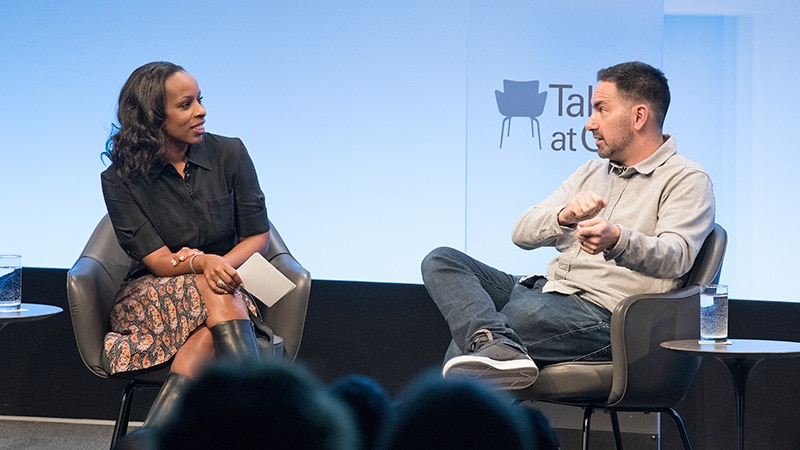 Talks at GS with Scott Budnick, Producer of Just Mercy
In a conversation moderated by Margaret Anadu, global head of the Urban Investment Group, Budnick discussed his 20-year career in film production, his work on criminal justice reform and his latest movie, Just Mercy, based on the memoir of acclaimed public interest lawyer Bryan Stevenson. Budnick, whose film production work also includes The Hangover series and War Dogs, founded the Anti-Recidivism Coalition in 2013 which advocates for policy change and provides mentoring for individuals released from incarceration. 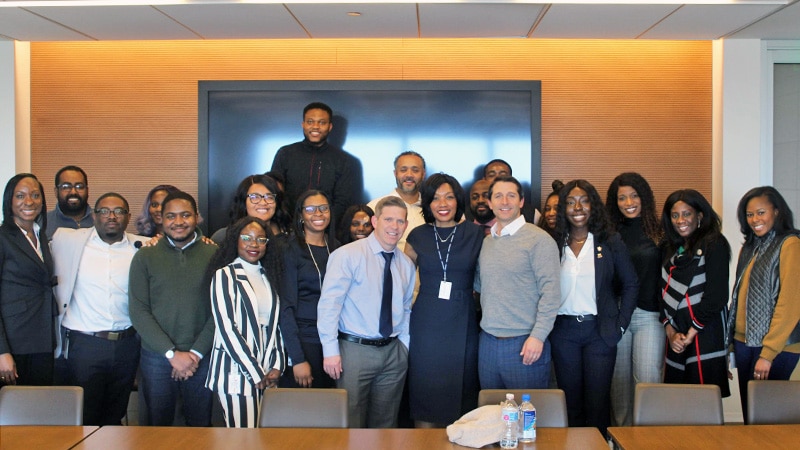 A Conversation with Stephanie Smith
Stephanie, who is head of Banking, Investing and Lending Operations, sat down with Anthony Mirabile, regional head of Consumer and Investment Management Division Operations in Salt Lake City, to discuss Stephanie’s experiences as a new partner, her time in the Asia Pacific region as head of regional Operations and her transition back to the US. “You won’t always make the right decision,” she explained to the audience. “I have made many mistakes in my 20 years at the firm. However, you have to be brilliant, own them and learn from them.” 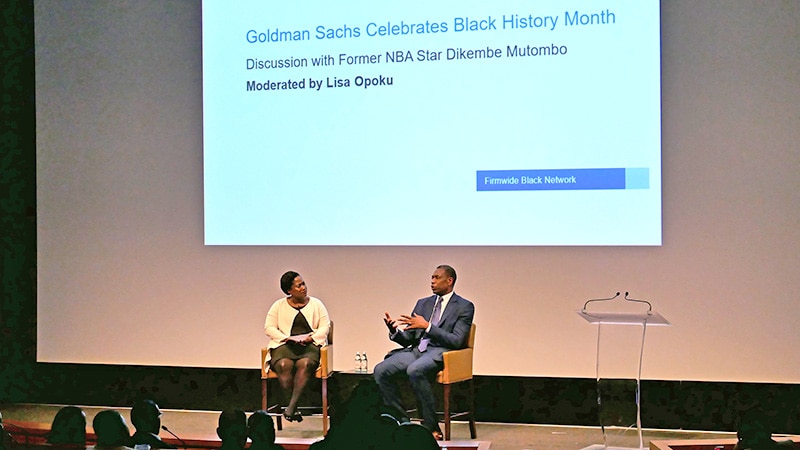 A Film Screening and Discussion with Former NBA Star Dikembe Mutombo
In a session moderated by Lisa Opoku, chief operating officer for the Engineering Division and the firm’s global strategists, Mutombo discussed his foundation (which Lisa is actively involved with.) The Dikembe Mutombo Foundation provides health, education and quality of life services for the people of the Democratic Republic of the Congo. Following the discussion, the FBN hosted a private screening of SYSTEM K, a film that profiles the creativity, power and resilience of Kinshasa’s people. “It’s always good to make sure your children know where they come from,” Mutombo said while reflecting on the film. 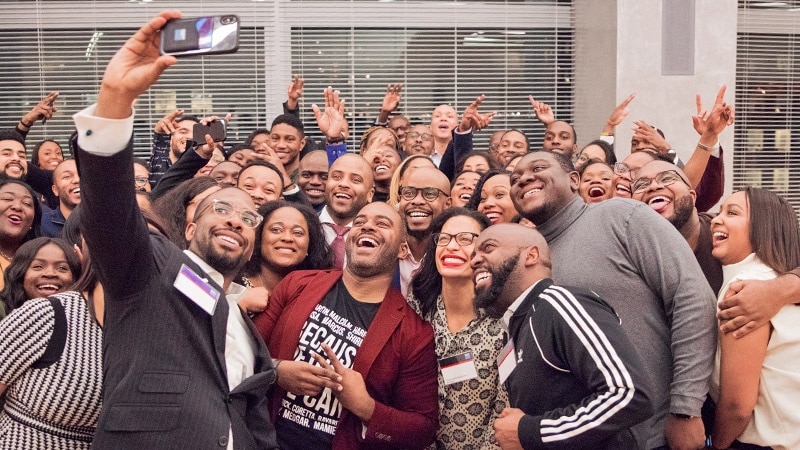 Alumni Homecoming: Celebrating Goldman Sachs with Alumni and Friends
We invited black professionals who previously worked at the firm to come celebrate Black History Month in our New York office. Asahi Pompey, head of Corporate Engagement and president of the Goldman Sachs Foundation, provided opening remarks and hosted a short Q&A with select alumni and Goldman Sachs people, who discussed their careers in the financial services industry and beyond. The discussion was followed by a networking reception. Exchanges at Goldman Sachs: From "Fish Out of Water" to Wall Street Changemaker
Sean Legister, a vice president in the Global Markets Division, talks about overcoming imposter syndrome on the Goldman Sachs trading floor and what led him to start Breakfast Bites, a monthly fireside chat connecting black colleagues with senior leaders. Legister tells podcast host Jake Siewert, “When I looked at the black population, particularly within the Global Markets Group, I thought, ‘I don’t think we lack the intellect. I don’t think we lack the hunger. I don’t think we lack ambition. I think sometimes where we may falter a little bit is culture, empowerment, access to resources.’ And so what could I do in my seat to be innovative or creative. Not just do what’s asked of me, but to give back?” Listen here


Additional offerings included events in recognition of BHM held in Dallas and Salt Lake City, and special menus in our New York and Jersey City office cafeterias that featured black guest chefs and black-owned vendors throughout the month of February. In addition, managers and coaches in the Black Analyst and Associate Initiative were invited to attend Identity Matters: Race and Ethnicity in the Workplace, an interactive program that explores the importance of valuing different perspectives and challenging conventional thinking. We are proud to continue our yearly tradition of honoring this month and showcasing its impact across the communities in which we live and work.

"Opening Up the Dialogue on Race"

Chief Diversity Officer Erika Irish Brown published an article on LinkedIn highlighting how the firm is creating platforms to engage in open and authentic conversations about race and identity. Read on LinkedIn