Celebrating the LGBT Community in the Industry

Goldman Sachs recently had the honor of hosting clients and colleagues from more than twenty-five firms to foster connectivity amongst the industry’s LGBT community and their allies – one of the first events of its kind in the space. Here, we talk with two colleagues on the Securities Division LGBT Working Group who helped plan the event – Eric, an analyst on the Client Relationship Management & Strategy desk, and Jon, a vice president in Interest Rate Product Sales.

What is the Securities LGBT Working Group, and how did you get involved?

Jon: The Securities LGBT Working Group is essentially the division’s branch of the firmwide LGBT Network, one of our many affinity networks. Our goal is to foster connectivity and inclusivity for LGBT colleagues and their allies. Having been in the industry for a number of years now, I’ve seen the shift occur in terms of LGBT acceptance on trading floors. At first I wasn’t part of the working group, but after hearing from younger LGBT colleagues that they were looking for role models and being encouraged by others I look up to, I decided to get more involved and be more visibly “out”.

Eric: I actually got involved because I first came into contact with Goldman through LGBT recruiting efforts, so getting involved with the network was one of my first priorities when I joined the firm.

Where did the idea for this event come from?

Jon: We had some conversations with a few clients and the feedback was there seemed to be a desire to see more of an LGBT community in the market facing roles like in Securities. The issue seemed to be no one was really sure how to build it – everyone seemed to be waiting for someone to take the lead. We were inspired by a similar event our Women’s Network had recently hosted that was really well received.

Eric: One of the most incredible aspects of working here is the opportunity to get involved with large, real-world projects at a very junior level. When Jon and the working group first began planning the event, they immediately reached out to give me the opportunity to get involved. Through planning the event, inviting clients and coordinating follow-ups, I built my knowledge of the industry and my own personal network.

Why was this event important to you and the firm?

Eric: I’m originally from a more conservative community in Georgia, so identifying as LGBT was difficult when I first came out and I worried about not being accepted or able to be myself at work. I quickly learned that is not the case here - the firm doesn’t just support my identity, but it celebrates it. Coming into the office every day knowing I can be my true, authentic self is one of the reasons I knew that Goldman Sachs was the place where I wanted to begin my professional career, and makes being involved in the broader community that much more rewarding.

Jon: This event was the first of its kind in the industry that we know of - it was really a proof of concept sort of event. We all felt like there was a desire for more of a LGBT community in the Securities space - the question was ‘were we right about that and would we be able to get people to turn up?’

And did people turn up?

Jon: What was most exciting is every firm we contacted were really enthusiastic about the idea, right up to their senior leaders. We had a few firms bring folks from beyond sales and trading, including heads of HR, chief diversity officers, and senior allies/sponsors of their own firm’s network. So many clients noted that they were really focused on (and some had struggled with) LGBT diversity, so they were eager to compare thoughts with us and each other.

What were some of the highlights of the event itself? 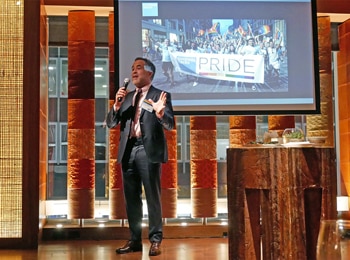 Jon: Marty Chavez, one of the co-heads of the division, made some remarks and it was so striking when he talked about being the only openly gay employee at GS globally when he joined in the early 1990’s – it’s a strong contrast to where we are today. Some of the most exciting things to come from the event have been clients asking us to arrange meetings with our diversity team and their business leadership to share what we as a firm are doing around the topic of LGBT diversity and how they can implement many of the programs we have. It’s great when we get to partner with our clients in such a meaningful way.

What’s next for the working group and the broader LGBT community?

Jon: Quite a lot actually – to start with, we want to develop more content-focused events with speakers addressing issues that are unique to this community, including in the people and diversity space. We’ve also had some clients asking us to set up round tables for LGBT clients based on the specific market area they are in, so we’re actively exploring that as well.

Eric: This is an exciting space because unlike so many other areas in the market where people don’t want to share their so called secret recipe, when it comes to LGBT diversity, everyone is willing to share what ideas work.