Elisha Wiesel is the firm's chief information officer and oversees Engineering, which comprises our Technology Division and global strategists groups. This article is an edited version of a discussion Wiesel had with Lisa Opoku, global chief operating officer for Engineering, about his career, what he’s focused on as CIO, and the importance of finding passion at work. 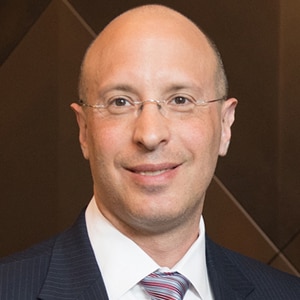 Lisa Opoku: Can you give us a glimpse into what you’re focused on?
Elisha Wiesel: I’m sure everybody has been reading up on Blockchain and digital assets – and what it means to trade digitally without relying on a central bank to stand behind a currency, and instead relying on technology, i.e., Blockchain. It’s a ledger that allows you to observe the flow of value, no matter where you are in the world. While we still don’t know in what form Blockchain technology might disrupt or transform financial services, the ability to transfer and exchange value in a totally new and digitally native format is something that is worthy of understanding.  We are spending a lot of time exploring what it would mean to hold, transfer, intermediate, and structure this new technology.

More broadly, we’re focused on how we’re transforming Goldman Sachs and our approach to clients in the digital space. How are we incorporating new ideas that have the potential to disrupt how we do things. We’re creating and analyzing data, and innovating in our workflows. For example in trading, a client might want to trade with us through a number of channels: either by picking up the phone and talking with someone, typing on a screen with a user interface, or just writing their own code and accessing our APIs. We have to realize that those preferences exist and optimize for our clients.

LO: You’ve been at the firm for 23 years now. What stands out to you among your experiences?
EW: Number one, we build cool stuff. We just do. When I joined in 1994, SecDB, a proprietary database that allows the firm to price trades and assess risk for trading positions, was still in its infancy and it was just amazing. Nobody else was building object-oriented databases with so much thought on how to architect the different layers, how to make it unbelievably extendable.

Second, the people I meet at Goldman Sachs represent such a diverse skillset. After 23 years, I’m still learning. You’re surrounded by folks who have tremendous things to teach. And they might not know how to program, but they know the psychology of markets. So you’re really getting access to this amazing story of capitalism and all the skillsets that go with it: selling, trading, banking, knowing your clients, understanding the flow of money around the world.

And third, the convening power of Goldman Sachs. You’re expected to figure out when to use it to cut across silos at the firm and just solve a problem with the right experts no matter where they happen to live. We’re highly collaborative. For example, there’s no shame in saying, “Hey, I need a piece of code that does this. Has anybody written that yet?” It gives you leverage, enables you to move quicker, iterate and adapt. For me, that’s one of the most profound and enjoyable parts of being a leader at Goldman Sachs.

LO: When you’re asked how you came to Goldman, I’ve heard you say before it was by accident. Tell us more.
EW: I really had no idea what Goldman was or really what Wall Street did. It was my senior year [of college], and I'd put my résumé in the résumé book in the college career center with a very clear ask that I wanted to be hired into the computer game industry. And then these guys called and left me a voicemail saying that they were from a firm called J. Aron. I didn’t know what it was, so I said no. But my roommate who was listening said "You have to go. This is the interview that everybody wants. It’s Goldman Sachs. This is Wall Street."

I ended up going to the interview, and I remember being blown away because the questions were harder than the programming questions I was asked at tech firms. They really made me sweat. I said no at the time for personal reasons, but then I got a call from the head of J. Aron strats , Armen Avanessians, who said: "Elisha, I don't know how to tell this to you, but I'm sorry, I refuse to accept your no. Here's what's going to happen. You're going to come back in a few days, ask questions, see this thing called SecDB. And I promise you by the end of the day you're going to want to stay." He was right.

In the end, it was a great career move because through the years we continue to innovate with our coding and applications. Even today, we’re doing things as or more cutting-edge than the traditional leading “technology” firms.

LO: What traits do you value most in colleagues?
EW: People who care passionately. Whatever they do or oversee at the firm, I look for people who are passionate about making sure that their product is always evolving and keeping up with the times, and who want to be plugged into the conversations around them and listen really well.

But the advice I’d give is be creative, be excited about something. Find something that you want to do at Goldman Sachs where you can have an impact. Between the waves of meetings on your calendars and the responsibilities you have, the demands of your teams, and managing up and sideways in our incredible ecosystem, carve out some time for yourself to think about what you want to do here. For me that’s Fridays – no meetings. People know it’s my contemplative time. Some of the best things at the firm were built on a Friday.

LO: At Managing Director Orientation earlier this year, all presenters had to pick a song that would play while they walked to the stage. What was your pick?
EW: When the event organizers reached out, I had a lot going on, but they said “You’ve got to pick a piece of music.” So mine was the battle music from Final Fantasy VII because that’s the video game my son is playing right now – I just haven't been able to get it out of my head. So that's how we got there. But in all seriousness, I love video games.

When I was eight or nine years old, we went to a hotel in Florida with my family, and I will never forget it, there was this machine in the corner with these two white lines going up and down, and a little white dot representing a ball going back and forth. It made a little beep every time you moved a paddle. That game was Pong, and it was revolutionary for me. I was, like, wow, what is that thing?  It looks so cool. I ended up spending much of my youth in front of a screen playing computer games and programming games on the side as a fun thing to do. At that time, there wasn’t really a programming offering in any real depth at my school – here I was, just fascinated with computers, while my parents really wanted me to be pre-law or pre-med. You know, something marketable.