A Look Back at Disability Awareness Month at Goldman Sachs

Throughout the month of October, Goldman Sachs recognized Disability Awareness Month by hosting several events focused on topics including autism, mental health, vision loss, and how employers can better support those with disabilities.

Puppies With a Purpose 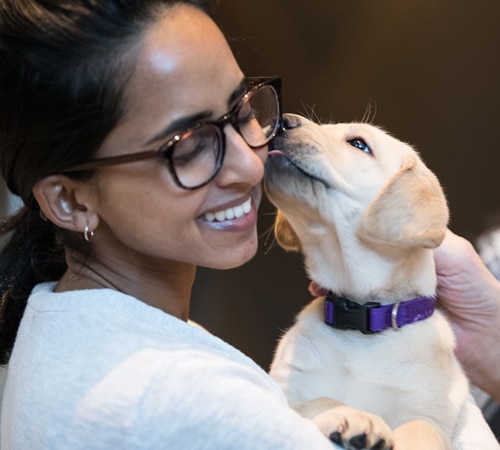 During a discussion on October 24 in New York, Thomas Panek, president and chief executive officer of Guiding Eyes for the Blind, an organization that trains and provides guide dogs to people with vision loss, outlined the importance of his organization’s work.

Panek discussed his plan to participate in the New York City half marathon in March 2019, where he will run guided by a relay team of specially trained guide dogs. Guiding Eyes is also training dogs for other runners of the marathon.

The Disability Interest Forum also hosted a series of events in Asia Pacific throughout Disability Awareness Week, which spanned October 22 to October 26. These events included fireside chats across the region with a local artist, author, a company founder with a disability, a sign language workshop hosted in Hong Kong and a caregiver networking event in Tokyo. In addition, a silent charity auction was held for artworks created by students in Singapore, with all proceeds benefiting an autism resource center.

In Bengaluru, the India Disability Interest Forum recognized International Day of People with Disabilities by hosting a series of events including a table tennis tournament, a workshop on tactile art and a firm sponsored counselling session for caregivers.

Events hosted by the Disability Interest Forum in New York included a conversation with Dr. Stephen Shore, an autism advocate and a professor whose research focuses on autism. He described growing up on the autism spectrum and discussed ways companies can be more accommodating of people with autism and Asperger’s syndrome.

Dr. Shore recommended that attendees “focus on what autistic people can do, instead of what they cannot do,” and reminded the audience that “we all work to our strengths.”

For the seventh consecutive year, the Disability Interest Forum also aired several films that will premiere at ReelAbilities, the New York Disabilities Film Festival. The films included “The Milky Pop Kid” and “Just, Go!” “The Milky Pop Kid” is a short comedy on authentic representation, featuring a woman with cerebral palsy, while “Just, Go!” profiles a young man named Just who lost both legs in an accident.

In addition, this year’s Disability Awareness Month program featured former US Congressman Patrick J. Kennedy (D-RI), founder of the Kennedy Forum, a nonprofit focused on advancing policy to better treat mental health issues and prevent substance abuse, in addition to advocating for greater evidence-based and measurement-based care in the US healthcare system.

In Salt Lake City, the firm was recognized with the Golden Key Award by the Utah Governor’s Committee on Employment of People with Disabilities. Goldman Sachs received the Large Business of the Year award, given to a business that has “gone above and beyond in their recruiting, hiring, retaining and promoting of individuals with disabilities.”