In our monthly Inside Engineering series, members of the Goldman Sachs Engineering team from around the world share stories and ideas they are passionate about with their colleagues. Topics range from workplace ideas to hobbies, and interesting activities they engage in outside the office. 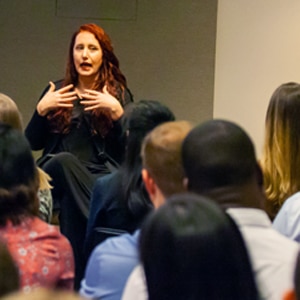 Recently, two team members spoke on the subject of mindfulness, or the act of accessing an efficient way of thinking or being. When it comes to the day-to-day work of an engineer, it can often be difficult to take a step back and be aware of the brain’s rapid flow of thoughts, according to Vanessa, a vice president on the Legal Technology team at Goldman Sachs. Vanessa and Kara, an analyst on the Engineering Marketing and Communications team, shared their passion and knowledge about practicing mindfulness in order to access new levels of creativity and thoughtfulness.

Vanessa explained how the act of pausing could help solve engineering problems. “Pausing gets you unexpected realizations,” she said, adding that pausing allows one to cross states of mind—the two key states being the fast and slow lanes of the brain. To engage in mindfulness and be the best version of ourselves, we need to be able to shift from state to state, according to Vanessa. “Slowing down one’s thought process by pausing allows access to systems of higher-level thinking,” she says. 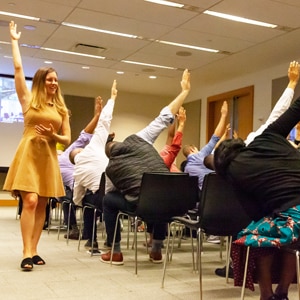 Kara, who practices mindfulness through movement in yoga and became a yoga teacher during college, uses yoga to become stronger or more flexible. “The most significant benefits from yoga happen in the mind through the act of tuning into the present,” she says, adding that recognizing how one feels as well as living in the moment are essential to accessing innovativeness and thoughtfulness. Kara told the audience that mindfulness itself will not be the direct cause of change, but instead will act as a catalyst to shift perspective and allow the mind a new space to be productive. “There is always an opportunity to find mindfulness during the course of a workday,” she said.