Engineering the Sounds of Music

The perfect synchronization of physics, math and mechanical concepts come together to produce the harmonious sounds we enjoy in music.

The year's first Inside Engineering session, a global speaker series open to engineers, started off on a high note, literally. Colleagues from engineering, each a musical expert in their instruments of choice, delved into the science and techniques behind their artistry. Lynn Spurgat has performed more than 25 operatic roles and numerous symphonic concerts, including solo vocal recitals at Carnegie Hall. Wesley Chen learned to play the violin at the tender age of four, and Tony Jin has been a pianist since the age of six. Wesley and Tony co-founded The Benchmark Instruments group, a chamber orchestra at Goldman Sachs that includes a variety of instruments from Western classical instruments to the melodica and the erhu (Chinese violin). 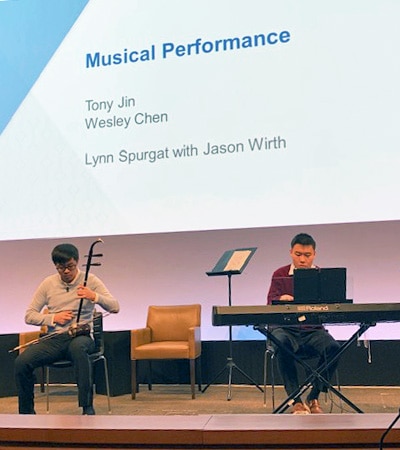 Tony Jin kicked off the session by explaining the physics of creating sound and why pianos sound the way they do. By playing the same note in different pitches on the keyboard, Tony demonstrated the sound of notes in octaves, and explained the mathematics behind frequency ratios which can be used to identify harmonious notes. He detailed the history behind the “perfect fifth,” a musical interval corresponding to a pair of pitches with a frequency ratio of 3:2. He further explained that musical theorists move from Pythagorean tuning to equal temperament systems.

Wesley Chen, a professional violinist, also explained the phenomenon that allows string instruments to function the way they do. To establish the fundamental science behind all string instruments, he started by dissecting the anatomy of a violin – from the rosin coated horse-hair bow he used, to the F-shaped holes on the violin that allowed it to project sound without a mic. He demonstrated how string instruments can produce harmonics by varying the pressure of the finger to capture higher frequency overtones, versus the normal sounds produced by pressing firmly and shortening the length of the string. 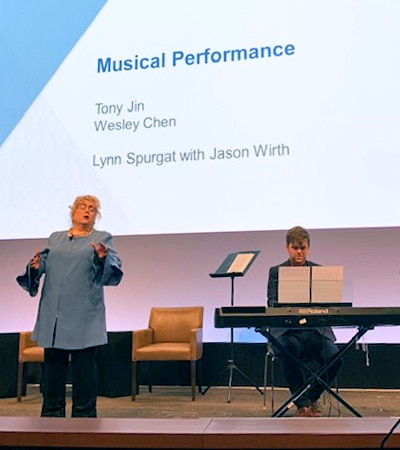 “In singing, the vocal chords vibrate 220 times per second,” opera singer Lynn Spurgat said to the audience, explaining how opera singers can be heard over very loud orchestras without a mic. Four key factors help to achieve this capability: body structure, breath flow, physical tuning and the functions inside the larynx. “I am my own instrument,” said Lynn, as she explained how different muscles on opposite ends of her body needed to work in conjunction to allow her to project her voice the way she needs. According to Lynn, “the human operatic voice works the same way as a jet engine.” The jet engine, she noted, has casement, blades, and spaces in between to resonate sound that can be heard from miles away. Similarly, the human body requires different parts to work in synchrony for full function. From standing up straight with an open chest to working out the position of the lips and tongue, all parts of the body are used to ensure the sound vibrates at the right frequency and amplitude. Opera singers learn how to compress and release air while breathing. “All aspects of the human body need to work in unison to project the desired sound.” She further elaborated, “Think of the structure of the Eiffel Tower. It has a strong base that narrows as you go higher till the shimmery heights at the top.” For Lynn, her body is that base, providing the foundation to produce a sound that projects 40 feet out in front her beyond the orchestra.

Following the talk, the trio entertained the audience to a musical performance. Tony and Wesley performed two pieces: “Csárdás” by Italian composer Vittorio Monti, and “Sai Ma” or “Horse Race,” a traditional Chinese piece. While Tony played the piano, Wesley switched from his violin to the erhu (Chinese violin), for the second song. To commemorate Chinese New Year. Lynn sang two pieces: “Hotel”, by Francis Poulenc, followed by “Langsamer Walzer” by Arnold Schoenburg. Lynn was accompanied by Jason Wirth, a pianist who has performed as a soloist with the Moscow Philharmonic and the St. Paul Chamber orchestra.