From Undocumented Immigrant to Goldman Sachs Associate: My American Dream 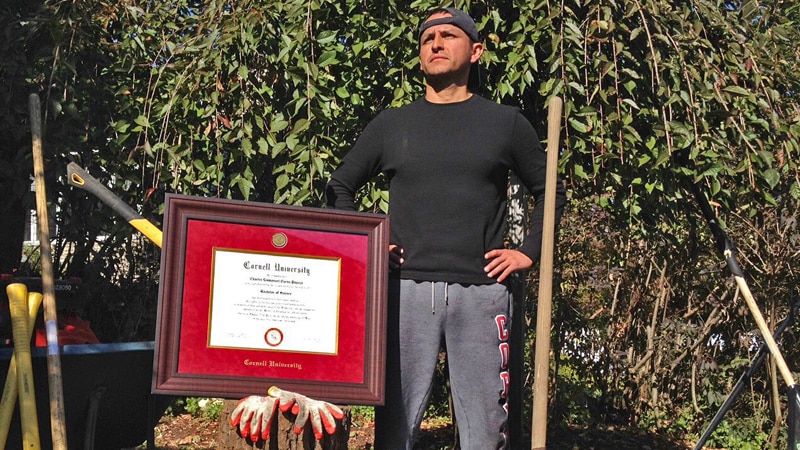 Charlis Cueva, an associate in our Operations Division, writes about his journey from undocumented immigrant in the US to working at Goldman Sachs.

What does the American Dream mean to a young immigrant? I guess you will find a variety of answers but each of them will tell a meaningful story. Some stories are already written and others, like mine, are being told as we speak.

From cleaning houses and mowing lawns to working at Goldman Sachs, my story is of an American Dream come true.

As a kid, my dream was to become a pilot so I could fly. But little did I know that the only flying in my future would be to the US from Perú, where I would challenge everything and everyone who would stand in the way of my dreams because failure was not an option.

I was born and raised in Perú. My parents immigrated to the US when I was 11. Their plan was to work hard and save enough to come back home. However, they ended up bringing my siblings and me along to the US years later.

I came to the US in the pursuit of the American dream at age 17. A week later, I became an undocumented immigrant. Young and ambitious, it was really hard to adapt to this new “reality”. Everywhere I turned for help or advice, I would hear, “You won’t be able to make that happen” as the answer.

It took about 17 years of my life in this country to finally find a path to success. In my own pursuit of happiness, I had many different jobs, which helped me build my work ethic.

A mentor I met along the way helped introduce me to Cornell University, where against all odds, I received a scholarship and eventually obtained an undergraduate degree. But while my classmates had internships over the summer and went straight to Wall Street after graduation, I had to go back to landscaping.

Even though it was frustrating, I never stopped believing in myself.

I finally received my Green Card in 2016. While I was undocumented, I managed to build my network through my jobs landscaping and at country clubs. When I received my Green Card, I reached out to one of these contacts, who worked at Goldman Sachs, who ended up inviting me to 200 West Street to meet. Months later, I joined the firm as a contingent worker, and today, I am a full-time employee.

But what was my secret to get where I'm today? My faith, my family and believing in myself. This is what I've been sharing with hundreds of undocumented youth in my community who just like me were brought to this country to pursue a better future. I never had an older sibling, or anyone to guide me in this challenging journey. That’s why I have dedicated myself to mentor others. Goldman Sachs believed in me. In return, I give 101% of myself every day to make sure I exceed all expectations while contributing to the firm’s values, goals and culture.

I sit on the Client Assets Team (Customer Protection Team) where I’m responsible for ensuring the Firm’s compliance with SEC Rule 15c3-3.  As a member of this team, I am involved in a full range of daily processes, regulatory audit work, as well as industrialization initiatives including the opportunity to learn process flows for both broker-dealers and banking entities.  My role involves working closely with other Operations teams, Regulatory Reporting, GSS, Compliance, and Legal to ensure compliance with customer protection rules. I would like to thank my team in Operations for the opportunity given to me and for contributing to my success.

This fall, I returned to my home country, Perú for the first time since leaving as a teenager 20 years ago. It was a trip filled with many emotions and accomplishments. I had left home alone with not much in my pockets, and returned professionally accomplished and with my son, Elliott, and soon-to-be wife, Jodelle.

Wherever I go, I carry my Peruvian roots and Hispanic culture with pride. I am a father and my family is now my new American Dream.

This is just the beginning of my story and I know the best is yet to come.