As an undergraduate at the University of Chicago, Jenny Fortner traded futures and commodities during her summers to help put her brothers and sisters through college.

“I got an early dose of what it means to help people through business,” said Jenny, who also earned her Series 3, 7 and 63 licenses during that time. 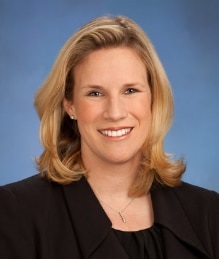 So when it came time to join the corporate world, it was important for Jenny to work at a firm that encouraged its people to make things better for others. “I wanted to be in a place where that was part of the culture.”

When Jenny, who is now a managing director, joined Goldman Sachs in 1998, the firm’s Community Team Works (CTW) -- a program in which employees work in partnership with local nonprofit organizations in team-based volunteer projects — was just getting started. “For me, it was an important lesson that you could be in the corporate world and still find ways to give back,” said Jenny, who is now a private wealth manager with Goldman Sachs in Chicago.

Through Jenny’s early involvement with the Special Olympics, she petitioned the Special Olympics to be included as part of the CTW program, which led to Goldman Sachs employees helping hand out awards, and assisting with track meets and softball tosses at the games.  A few years later, at the encouragement of others, she joined the board of the Special Olympics Illinois, as one of the youngest board members to join the nonprofit.

Having served on the board for 17 years, Jenny said the experience has not only been personally enriching and rewarding, but has also helped her professionally. “I learned so much from being on the board that I can bring back to my job every day. Especially for the younger generation, it’s important to get involved in meaningful activities outside of work. You can use all the skills you’re learning to really make a difference.”