Garry Herbert works in the firm’s Investment Management Division in London. He competed for Great Britain in Rowing (Coxed Pair - Gold Medal) at the 1992 Olympics in Barcelona. Here, he shared how he got involved in rowing, his journey to the Olympics and what he learned from competing that has translated to his business experience. 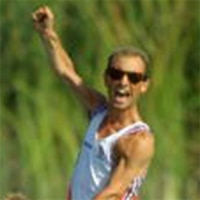 Q: How did you get involved in rowing?
Garry: It all started when I was 14, when I watched the Los Angeles Olympic Games in 1984. My sports teacher’s son was rowing at that Olympics [in the Men’s Coxed Fours], and I remember watching all the rowing, and it came down to Great Britain and the United States. In the final of the Men’s Coxed Fours, Great Britain, by very little, just beat the Americans. It was epic.

The races are on beautiful lakes and [take place] early in the morning, so they’re always very picturesque with the mist coming up off the water. It was very romantic and inspiring for a 14-year-old kid at home to be watching this and seeing the British crew win. From that moment, I wanted to represent my country in an event like that and win a gold medal.

Q: Tell us about your Olympic experience. What was the journey, from qualifying to actually participating in the Games?
Garry: I started rowing in 1984, and then in 1987, someone said to me, ‘The way you’re going to move on is to get selected for the junior rowing team.’ I didn’t go to a rowing school, so I had to work. I used to take myself along to the trials and then just got along really well with some of the guys that were trialing, and then they put a [team] of eight of us together, and that was a pretty good eight.

From there, in various boats we went to the under 23 team. Then we got into the national team, [then] the world championship team. … [We were] the rag bag of kids, the youngsters out of that junior team, who didn’t quite know what to do.

[The 1992 Olympics in Barcelona] became a David and Goliath story, if you will. The Italians were two-time Olympic champions and seven-time world champions, and we got a bronze medal the year before in the rag bag eight. So there was us in a pair again these God-like creatures.

I guess that’s where my tenacity comes from, is everybody saying to us, "You know, you guys would do really well if you get a medal,” and us sort of accepting their praise as limited as it was, but behind the scenes we always thought we could beat them. We were going there to beat them. We weren’t going there for a medal.

We only beat the Italians by two or three feet. They were leading us right to the line, and then we rode through them right to the last minute. We looked back to 1984, [and] that was the race that started us. When we were at that age in 1984, as kids, we said to each other, we want to win a gold medal. So when we got the opportunity to do that, we got to fulfill the last chapter.

Q: Please share any setbacks or challenges you experienced on your path to the Olympics. How did these impact you and how did you manage them?
Garry: Absolutely. You lose races where you think, ‘God, how did I lose that race?’ You fall out with coaches and you think, ‘God, how am I going to get back into this crew?’ And then you see years and years go by where nothing major happens, [and you wonder] where the next break is going to come from, and then that break comes just by being in the right place at the right time, because you’ve worked yourself into a position to be around. It’s not all rosy.

Q: What skills did you develop in your role in rowing, and how have they translated to your business experience?
Garry: The one word that would come up to me is trust, because you’re in a boat [and] where [as a coxswain] you’re steering the boat, controlling the speed of the boat by talking to the guys, and you’re telling them whether they’re good, bad or different. They believe you, and if you tell them to do something they’ll do it, and you get their confidence – that’s a very powerful combination.

[At Goldman Sachs] we build client relationships, and the most important thing that we have [is trust]. Our clients look to us for trust above all else. We would never do anything for our clients that we wouldn’t do for ourselves. So I would never say anything in a boat which I didn’t believe. It’s buying in, having the confidence to instill confidence in others [and] leadership by example. I think the great leaders are leaders that are quiet and just get on and do it, and they lead by example.

Q: What did you take from your Olympic experience that would be helpful for other people at Goldman Sachs to hear?
Garry: [I learned] about complete self-belief. [You need to] utterly believe without reservation that you can do something and that you’re really prepared. You’ve got to work a little bit harder and a little bit smarter than your competition.

Q: What is your favorite memory from participating in the Olympics?
Garry: Marching at the Opening Ceremony. It’s the only time the whole Olympic team, across the various sports, comes together – it’s a phenomenal mixture of diverse, talented people all with a common objective. There’s a great sense of anticipation of what’s to follow and the final recognition that you have arrived at the greatest sporting event in the world.