Goldman Sachs Warsaw Celebrates First Anniversary of IT for SHE Programme 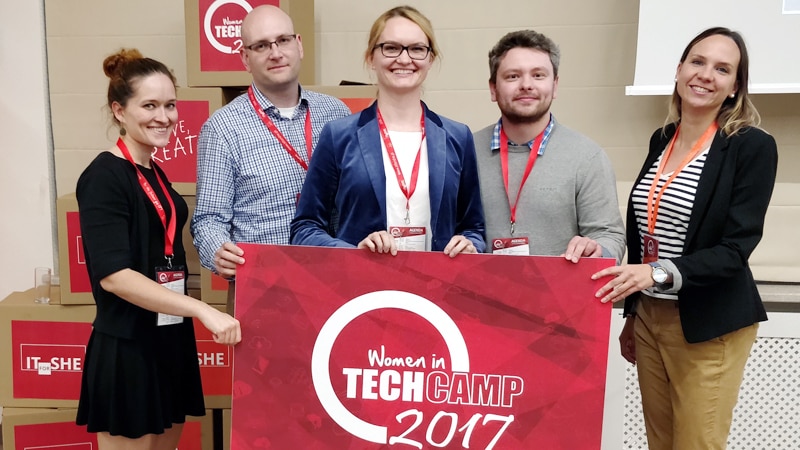 Goldman Sachs, alongside 6 other companies is celebrating the anniversary of their flagship  IT for SHE programme in Poland. Launched in 2017, the programme is designed to encourage more women into technology, by offering mentoring support to women STEM students.  The programme is focused on demystifying the technology and engineering sectors and showing the opportunities for women in the industry.

Volunteering
A core tenant of IT for SHE is a volunteering programme, in which female technology students travelled to schools in small towns and villages throughout Poland, hosting workshops in various technologies such as robotics, programming & 3D printing. Through this forum, which reached 1000 kids last year, IT for SHE hopes to spread the word about the opportunities within technology and break the gender stereotypes. Goldman Sachs Warsaw Women’s Network representatives took part in 5 of those workshops.

Bootcamp
A key highlight of the programme is the Women in Tech Camp – a five-day bootcamp hosted in Polanika in the south of Poland. Over 130 women technology students participated in different activities, discussions and focused on programming skills, mentoring and inspiring future careers in IT/Tech sector. Fifteen Goldman Sachs employees attended the event, acting as trainers, mentors and career advisors to the students.

Mentoring
Alongside these sessions, Female IT Students entered a 6-month Mentoring Relationship with employees of the partner companies in order to develop their hard and soft skills, plan their career path and work on a team project. Five Goldman Sachs senior leaders actively participated in the program guiding their mentees towards their goals and sharing their career stories with them.

The Mentoring Finale was held in the Goldman Sachs Warsaw office which marked the end of the 2017 IT for SHE’s exciting journey. Participants pairs shared their impressive accomplishments; whether soft skills or technical projects, every pair had a unique and interesting story to share highlighting the success of the last year.

Adriana, one of the students in the programme noted: “The 6 months of the mentoring program were filled with intensive and fruitful work. By following my Mentor's guidelines, I was able to create a mobile and web application from scratch. This experience developed my knowledge of various JavaScript frameworks but also boosted the level of my self-esteem.”

IT for SHE has received wide recognition in its first year, winning the European Commission’s European Digital Skills Award, selected from over 240 applicants. The award was presented by Mariya Gabriel, European Commissioner for Digital Economy.