Romel Baral, an analyst in our Securities Division in Bengaluru, was one of the petitioners who helped challenge Section 377 of the Indian Penal Code—a law that criminalized homosexuality.  On September 6, 2018, the Indian Supreme Court issued a decision saying that Section 377—to the extent that it criminalized private and consensual sexual acts of adults—was unconstitutional. Romel reflects on his decision to bring the petition forward and his reaction to the ruling.

Can you tell us about your decision to join this petition?
Romel Baral: I was aware of the importance of Section 377 in LGBTQ context for a long time. However, I did not have enough courage to face society, 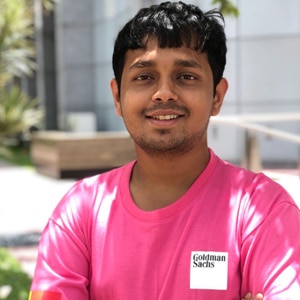 mostly because of the experiences I had growing up. At Goldman, I have seen people being far more progressive than I expected them to be. For example, one of my friends once said, “Just so you know, you can come out. There is no issue at all.” With the mindset of the urban population in Bengaluru changing, and the support of colleagues, I had hope and developed a strong personal need to do whatever it requires for a better tomorrow. I finally mustered the courage to join the petition.

What was it like in the court room on the day of the hearings?
RB: It was the first time I attended any court session – and it was in the Supreme Court. I expected it to be like what is shown in movies. It was quite different. Attending the session with people who have fought for equality for decades felt empowering. It also gave me different points of view over the issue. I was awe-inspired by the speech our lawyer, Menaka Guruswamy, gave in Court. She spoke for our rights, and her remarks were met with pin drop silence in the courtroom. Tears were rolling down eyes. It was very emotional.

What did your colleagues say when they learned about your participation in the hearings?
RB: I received a lot of positive reactions on the floor. I could see happiness in the eyes of some of the colleagues, which really moved me. People asked more details about the petition. Some of them went out of their ways to offer support whenever required. As I mentioned in an interview with the media, when I told colleagues why this law needs to change and why I need to be part of the petition – they told me to make them proud!

What are your hopes for the future?
RB: I hope to see more LGBT awareness and acceptance throughout India and around the globe. The struggle for equality in India is limited to urban populations as of now. We need to create awareness through various media so that we can reach more communities. I hope that people understand that sexuality is a spectrum and it is okay to be “different.”

Just one final question on the ruling.  What was your reaction on the day of the verdict?
RB: I became nervous as I wasn’t expecting the verdict date to be that early. I immediately informed Human Capital Management and booked flights to attend the verdict. On the day, I reached the Supreme Court premises two hours early so that I could get the best seats to observe the landmark judgement. The session started a bit late because of a full court session before.

I started to get a bit emotional after the Chief Justice of India began the announcement with a quote from German philosopher Johann Wolfgang von Goethe, "I am what I am. So take me as I am.” We were all holding each other’s hands in anticipation. The verdict was only half an hour long, but it felt like a lifetime. After the verdict, we came out of the courtroom and were greeted by friends and well-wishers from the LGBTQIA community and the media.

I’m proud to have witnessed and participated in this historic moment, which marks the beginning of progress, respect and equality.