Justin Tuck: From the New York Giants to Working at Goldman Sachs 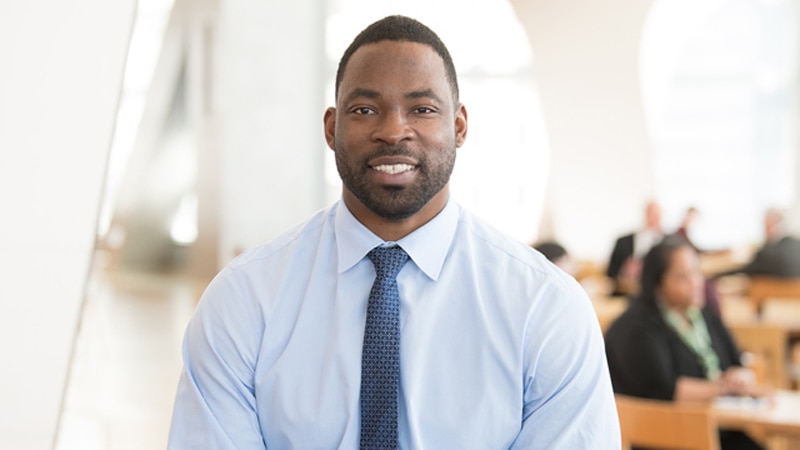 After an 11-year career in the National Football League (NFL) and earning his MBA at Wharton, Justin Tuck found his way to Goldman Sachs. Now a vice president in Private Wealth Management (PWM), Justin reflects on his journey from professional football to finance – and how football and finance are not as different as they might seem.

“It’s all about relationships,” Justin explained. In his role as a vice president in PWM, Justin draws on his experiences as a professional football player to work alongside his team to serve clients. “Dealing with personalities in locker rooms helps. The correlation between an NFL locker room and a desk or client meeting is much higher than I would have anticipated.”

As a member of the partners coverage team, Justin has found teamwork to be just as important as on the field. “I have the opportunity to learn from some of the smartest minds in the business – the diversity of thought is really compelling.”

Born and raised in Kellyton, Alabama, a town of about 200 people, Justin got his start on the national stage playing football at Notre Dame. “By the way, 85 people from Kellyton have the last name Tuck,” Justin joked, “So maybe I got recruited to Notre Dame by accident.”

After football, Justin attended the Wharton School of the University of Pennsylvania, and considered the idea of a second career in finance. He already had relationships with people at Goldman Sachs from his days on the field, and while in school, he had also interned at the firm.

“I was intrigued by the entrepreneurial businesses at the firm, as well as the flexibility PWM offers,” Justin said. “As a dad with two young kids, I love that I have the opportunity to grow a business and serve clients, while also being able to structure my day around my family.”

Justin cites self-determination and confidence as key to his success.

“Don’t allow people to define you,” he said, “When I left for Notre Dame, people said I’d never make it there. Leaving Notre Dame for New York and the NFL, they said the same thing. Same with going to Wharton, and now Goldman Sachs. If I did [listen to them], I’d just be another kid with a lot of promise living in Kellyton, Alabama.”

Looking back, his fondest memory of the Super Bowl was being part of something greater – a “dynasty,” he said. “You have to look at the big picture – everybody plays a part in winning.”

The biggest similarity between football and finance? Putting in the work.

“Since I was a kid, I worked to have the chance to win Super Bowls. And now I’m in this role, I know what my goals are. I know I’ll be smarter tomorrow than I was today, " Justin said, “and if I take that approach, I’ll do well.”